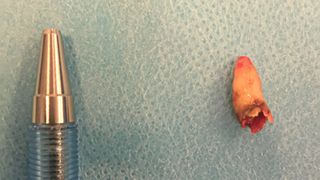 The tooth, shortly after it was pulled from the man's nose.
(Image: © Copyright 2019 BMJ Case Reports)

A man got a completely unexpected diagnosis after he told his doctors that for the past two years, his left nostril had been stuffy, drippy and losing its ability to smell.

The cause wasn't a virus. Nor was it the result of a bacterial infection. Rather, doctors found a wayward tooth growing in the man's nose.

The nose is no place for a tooth. So, doctors used a pair of forceps to extract the pearly white, according to a case report published online Feb. 21 in the journal BMJ Case Reports. [27 Oddest Medical Case Reports]

Before the bizarre diagnosis, the 59-year-old had tried topical steroids to treat his nasal woes. When that didn't work, he visited the the otorhinolaryngology (ear, nose and throat) department at Aarhus University Hospital in Denmark. There, a CT scan revealed a mucus-covered mass on the floor of his nasal cavity, the passageway through which air whooshes when we breathe through our noses.

The man's doctors immediately suspected that the man had either a dermoid cyst — a growth that some people are born with that contains structures such as hair, teeth, fluid or skin glands, or an impacted tooth — one that has been prevented from growing normally in the mouth.

The man promptly had surgery to remove the mysterious lump. An examination of the mass revealed the stray tooth, which was covered with inflamed nasal tissue.

It's not entirely clear why the patient developed the anomaly in his nose. Cases such as this one are rare, occurring in just 0.1 to 1 percent of the population and more commonly in men, the doctors wrote in the report. Sometimes, teeth can grow in a person's nose because of trauma or infections that affect either area. Developmental problems such as a cleft lip or cleft palate can also cause errant teeth to grow in the nose, the authors noted.

"In our case there was no obvious explanation," the doctors wrote in the case report. The patient had experienced a facial trauma in his youth (both his jaw and nose were fractured), but the doctors said this injury probably didn't cause the tooth to grow in his nose.

Instead, it's likely that the man had the tooth in his nose for most of his life, but he only started experiencing symptoms when the area became inflamed.

Dr. Alex Farag, assistant professor of otolaryngology and head and neck surgery at The Ohio State University Wexner Medical Center in Columbus, Ohio, who wasn't involved in the case, said that the report is a reminder that "you always have to keep your mind open when you're thinking about chronic sinusitis and what the causes could be."

Overall, cases like this one are "quite rare," Farag told Live Science. However, the man's symptoms did match the eventual diagnosis: A foreign body in the sinuses will indeed impact how well the sinuses function, he said.

Often, when a patient comes in with symptoms such as these – including congestion in just one nostril, loss of smell and chronic nasal discharge – doctors will first try treating them with drugs, such as antibiotics, antihistamines or steroids. If those treatments don't work, then a medical imaging scan, such as a CT scan, can usually identify the problem, Farag said.

One month after the man's surgery, he had recovered and was no longer experiencing symptoms, the doctors said in the report.