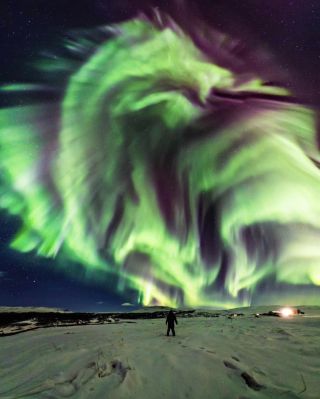 Holy smokes! An aurora that resembles a dragon recently loomed in the skies over Iceland, and NASA scientists aren't exactly sure why it showed up when it did.
(Image: © Jingyi Zhang & Wang Zheng)

A gargantuan green dragon hisses in the sky over Iceland. Either "Game of Thrones" really upped its production budget for its final season, or the sun belched a barrage of charged particles into our atmosphere again.

As much as any of us would like to see a real dragon breathe flames into the winter sky, buzzkill NASA blames solar activity — as usual — for the writhing, "fire-breathing"- aurora that loomed over Iceland earlier this month.

Auroras like this occur when some of the sun's many magnetic field lines twist together and burst, creating sunspots. Charged particles gush out of these spots and soar on the solar wind deep into space. If Earth happens to be in the way of such a stellar energy storm, the particles crash into our planet's own magnetic field and careen through our atmosphere toward the poles. Along the way, those particles interact with molecules of oxygen, nitrogen and other elements in our atmosphere to create the dazzling light show we call the aurora. [Spaced Out! 101 Astronomy Photos That Will Blow Your Mind]

While auroras themselves are not an unusual sight, NASA noted that this Icelandic dragon (which also resembles evil queen Maleficent's dragon incarnation from Disney's "Sleeping Beauty") appeared at an unexpected time. "No sunspots have appeared on the Sun so far in February, making the multiple days of picturesque auroral activity this month somewhat surprising," the editors of NASA's astronomy picture of the day blog wrote on Feb. 18.

Photographers Jingyi Zhang and Wang Zheng were equally surprised to see the mythical beast appear in the sky over Iceland. According to NASA, Zhang's mother was so excited by the unusual auroral activity that she ran outside with the photographers (and ended up in the foreground of Zhang's picture).

And the dragon wasn't the only supernatural creature to appear in the aurora that night.

"Interestingly, my partner photographed a phoenix at the same time," Zhang told Live Science in an email.

Rainbow Album: The Many Colors of The Sun

Aurora Borealis: What Causes the Northern Lights and Where to See Them