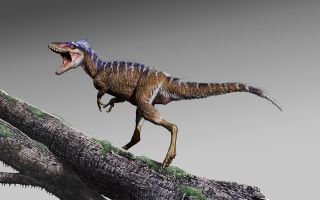 The fearsome Tyrannosaurus rex was an enormous dinosaur. However, this giant carnivore had very humble beginnings, according to a new fossil discovery.

Paleontologists recently discovered an early ancestor to T. rex that was positively puny, about the size of a small deer. The scientists found fossilized leg bones and teeth of T. rex's predecessor at a dig site in central Utah known as the Cliffs of Insanity.

These fossils came from a previously unknown tyrannosaur species and filled a 70-million-year gap in the family tree of North American tyrannosaurs, researchers reported in a new study. [Image Gallery: The Life of T. Rex]

The fossils were bones from the tyrannosaur of doom's right hind leg and foot, dating to 96 million years ago. In life, the animal was a slender dinosaur that stood no more than 4 feet tall (1 meter) at the hip. It was likely a juvenile that was nearly full-grown — at least 6 to 7 years old — when it died, according to the study.

But even though the deer-size dinosaur lacked the power of the much-bigger T. rex, it would still have been "a formidable predator," lead study author Lindsay Zanno, a paleontologist at North Carolina State University and head of paleontology at the North Carolina Museum of Natural Sciences, said in a statement.

"Moros was lightweight and exceptionally fast," Zanno said. "It could easily have run down prey while avoiding confrontation with the top predators of the day."

The diminutive dinosaur's closest relatives — and the origins of the tyrannosaur lineage — were traced to Asia, according to the study.

But what happened in the group over the millions of years in between — when tyrannosaurs evolved "from wallflower to prom king" — has been a long-standing mystery, Zanno said.

With the discovery of M. intrepidus, scientists now see that tyrannosaurs remained small for millions of years longer than previously thought and that it took only about 15 million years for the pint-size tyrannosaur of doom to evolve into the towering T. rex of the late Cretaceous. Over that period, a changing climate wiped out the allosaurs, opening a niche that tyrannosaurs then filled, the researchers reported.

The findings were published online today (Feb. 21) in the journal Communications Biology.