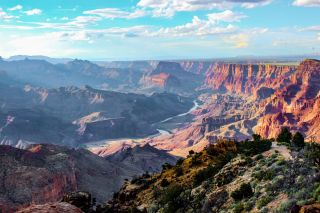 For nearly 20 years, a trio of 5-gallon (19 liters) paint buckets sat near the taxidermy exhibit at Grand Canyon National Park's museum collections building. Those buckets, it turns out, weren't holding paint — they were actually loaded up with uranium ore, a naturally occurring rock rich in uranium that gives off potentially dangerous radiation.

Elston "Swede" Stephenson, a health and wellness manager at the park's South Rim, recently described the uranium find and subsequent "cover-up" in a series of email blasts to Congress, his fellow National Park Service employees and the staff of The Arizona Republic newspaper. [Soviets Hid Nuclear Bunkers in Poland's Forests (Photos)]

Stephenson warned that thousands of employees, tourists and school groups who visited the exhibit between 2000 and 2018 were likely "exposed" to dangerous amounts of radiation, especially groups of kids who sat for 30-minute presentations in the uranium's vicinity. These children may have been exposed to roughly 1,400 times the safe radiation dosage allowed by the Nuclear Regulatory Commission, Stephenson wrote. Scary stuff, if true.

However, several experts told Live Science that Stephenson's assessment may be unfounded.

"If the time spent near the ore was short, there is likely little cause for concern," Bill Field, a professor of Occupational and Environmental Health at the University of Iowa, told Live Science in an email.

Over time, uranium can break down into radioactive materials like radium and release harmful gas like radon. Studies of uranium miners have shown that prolonged exposure to uranium's decay products can increase the chances of getting cancer — However, Field said, "The risk from a few buckets of the uranium ore is quite different than a career in uranium mining."

According to F. Ward Whicker, a radioecology expert and professor emeritus at Colorado State University, uranium ore emits all three types of radiation — alpha particles, beta particles and gamma particles. Of these, only strong gamma rays would be likely to penetrate the sealed containers and affect bystanders in the room.

"The amounts of radiation exposure from natural terrestrial sources and galactic cosmic rays to people living anywhere is far higher than most realize," Whicker said. "Life flourishes in this constant radiation environment because DNA repair mechanisms operate efficiently and rapidly in cells — provided that intensity of radiation exposure is within certain levels."

The danger, if any, from the Grand Canyon ore buckets depends on a long list of factors, Whicker said, including an individual's distance from the ore, the length of their exposure, the quantity of ore in the buckets, the amount of uranium in that ore, and the amount of shielding provided by the rocky parts of the ore itself and the container.

The ore's relative harmlessness is reflected in a report from the Parks Service, which Stephenson referenced in his emails.

After a teenager with a Geiger counter accidentally discovered the ore buckets in the museum in March 2018, the Parks Service launched a brief investigation to test radiation levels in and around the building. According to their report (which Stephenson quoted to The Arizona Republic), direct contact with the ore resulted in radiation levels at roughly twice the safe annual dosage allowed by the Nuclear Regulatory Commission — however, readings taken just 5 feet (1.5 meters) away from the bucket showed zero radiation.

A statement from the Health Physics Society (HPS), released on Feb. 20 in response to the ore incident, also indicated the health risks are negligible. "Uranium ore is a low-risk material that, unless ingested, would not be emitting enough radiation from these three buckets to cause harmful effects," according to the HPS statement.

The uranium ore has since been disposed of in a nearby uranium mine. Meanwhile, the Parks Service, the U.S. Occupational Safety and Health Administration and the Arizona Bureau of Radiation Control are now investigating the museum and its premises. According to Emily Davis, Grand Canyon National Park Public Affairs Officer, radiation levels at the site are normal and safe.

"A recent survey of the Grand Canyon National Park's museum collection facility found radiation levels at background levels — the amount always present in the environment — and below levels of concern for public health and safety," Davis told NPR. "There is no current risk to the public or park employees. The museum collection facility is open and work routines have continued as normal."

Any long-term effects caused by the ore's 18-year stint in the museum remain to be identified. While it might be negligible, the ore likely did increase the radon levels in the building somewhat, Field told Live Science.

"The facility should have radon testing performed," Field said. "Over the long term, however, the potential exposure from radon from natural sources in the soil and rock under the facility would likely be the greatest source of radiation to the public and workers."

Stephenson did not immediately respond to Live Science's request for comment.

Editor’s note: This article was corrected to clarify that uranium ore releases alpha, beta and gamma radiation, and to include a statement from the Health Physics Society.