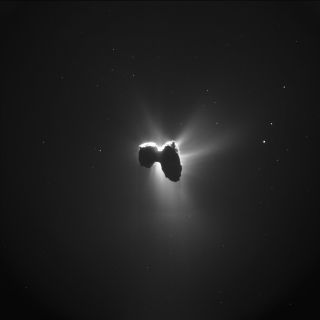 Rosetta made this image of the comet as it approached
(Image: © ESA/Rosetta/NavCam – CC BY-SA IGO 3.0 )

The rubber ducky comet's head has spent 4.5 billion years trying to twist away from its neck. And that's caused some stress fractures.

Comet 67P/Churyumov-Gerasimenko, which the European Space Agency explored for two years using its Rosetta probe, takes its name from its dual-lobe shape — which gives it a duck-like head, neck and body. Now, thanks to a new three-dimensional analysis of images from the Rosetta mission, researchers believe the comet is full of fissures, some of them piercing into its neck as deeply as 1,600 feet (500 meters).

On Earth, fissures and cracks tend to originate in movements driven by this planet's plate tectonics and hot, molten interior. But Comet 67P is cold and dead inside. Its fissures, the researchers said in a paper published Feb. 18 in the journal Nature Geoscience, seem to be the result of its two lobes torquing and twisting against each other in different directions. [Spectacular Comet Photos (Gallery)]

"It's as if the material in each hemisphere is pulling and moving apart, contorting the middle part — the neck — and thinning it via the resulting mechanical erosion," co-author Olivier Groussin, an astronomer at Aix-Marseille University in France, said in a statement.

At their inception, the two bodies joined together awkwardly and imperfectly. Its odd structure created neck-breaking forces in the comet's journey through the solar system as it tumbled along for 4.5 billion years on an elliptical orbit between Earth and Jupiter.

Interestingly, it seems like this two-lobed structure may be common in our solar system.

NASA's New Horizons probe recently snapped images of a Kuiper belt object called (486958) 2014 MU69, which is similar in many respects to Comet 67P, but it orbits much farther away from the sun. (The Kuiper belt is a ring-shaped area in the solar system beyond Neptune’s orbit.) That object also revealed a surprising two-lobed structure in its closeup, though the shape of the two lobes was flatter, making it and look more like a pancake than a rubber duck.

Unlike 67P, though, the researchers said (486958) 2014 MU69 didn't reveal any obvious visual signs of stress. So, while this two-lobed structure may be common, it's not yet clear whether objects with this kind of shape always end up with a neck full of stress fractures.