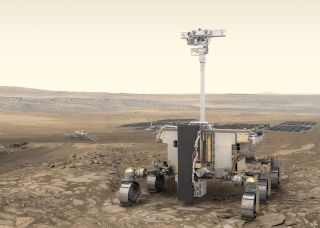 The European Space Agency (ESA) announced today (Feb. 7) that its next Mars rover will be named for Rosalind Franklin, the late British scientist, who was behind the discovery of DNA's double-helix structure.

ESA's ExoMars rover, "Rosalind the rover," is scheduled to launch to the Red Planet in 2020 and then land in 2021 on a mission to look for signs of life, or extinct life.

Chosen from 36,000 suggestions, the name was revealed at the Airbus facility in Stevenage, in the United Kingdom, where the rover is being assembled. [12 Amazing Women Who Totally Rocked at Science]

"This rover will scout the Martian surface equipped with next-generation instruments — a fully fledged automated laboratory on Mars," ESA astronaut Tim Peake, who is from the U.K., said during the announcement.

Today, Franklin is regarded as one of the 20th century's most overlooked scientists. While she was a biophysicist at King's College London, she captured "Photo 51"— an X-ray image of a strand of DNA extracted from human calf tissue. At that time, hers was the best shot of the double helix. Without her knowledge, her colleague Maurice Wilkins showed the image to his American collaborators James Watson and Francis Crick. Franklin's work was integral to their discovery of the correct structure of DNA.

Franklin died of ovarian cancer in 1958, at age 37, without receiving the public recognition for her work in DNA that would be heaped on her male peers. In 1962, Watson, Crick and Wilkins shared the Nobel Prize for the double-helix discovery. Nobel Prizes cannot be awarded posthumously, but it's unclear if Franklin would have been given credit at the time, anyway. (Watson wrote in his 1968 book on the discovery that Franklin was a "belligerent, emotional woman unable to interpret her own data.")

"This name reminds us that it is in the human genes to explore. Science is in our DNA, and in everything we do at ESA," the agency's director general Jan Woerner said in the announcement. "Rosalind the rover captures this spirit and carries us all to the forefront of space exploration."