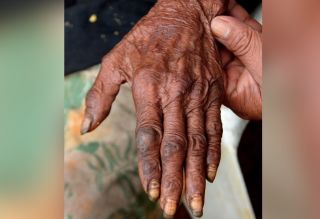 Sand fleas are parasites that burrow into people's skin, causing intense pain, itching and inflammation. A new report describes five cases of "extreme" sand flea infections. Above, an image showing embedded sand fleas on the back of a patient's hand.
(Image: © Feldmeier, et al. (2018), CC BY)

Serious infections with sand fleas — parasites that burrow into people's skin — are rare and haven't been documented much over the last 50 years. But now, a new report describes five cases of "extreme" sand flea infections in Colombia, showing that life-threatening illnesses with this parasite still occur.

The five patients each had hundreds to thousands of sand fleas embedded in their skin, and most of the patients were unable to move as a result of their condition, according to the report, published today (Feb. 7) in the journal PLOS Neglected Tropical Diseases. One patient even needed a blood transfusion due to severe anemia — likely the result of the blood-sucking fleas.

Such extreme cases often go unnoticed by health care providers, because the patients with these infections live in remote areas and lack access to health care, the report said.

"The true frequency of this devastating condition is probably underestimated," the study authors wrote. [8 Awful Parasite Infections That Will Make Your Skin Crawl]

Sand fleas, or Tunga penetrans, are native to certain tropical areas, including parts of South America, the Caribbean, sub-Saharan Africa and Madagascar. In humans, the insects cause a disease called tungiasis, in which the fleas burrow into the skin — usually in parts of the toes, the sole or the heel of the foot.

The fleas persistently suck the blood of their hosts and can increase their body size by a factor of 2,000 within weeks, according to the World Health Organization. Burrowed fleas can cause intense inflammation, pain and itching, and in severe cases, the burrowing can cause multiple lesions on the person's feet, making it difficult to walk.

The fleas lay eggs through a hole in the skin, and the eggs fall to the ground where they hatch. After about three weeks, the burrowed parasite dies and ceases causing symptoms. This means that, in theory, the disease is "self-limiting," or goes away on its own after a period of time, the report authors said. However, in endemic and poverty-stricken areas, reinfection with the fleas is common and a person's "parasite load" can gradually increase over time, the authors said.

In the new report, the researchers described five patients with tungiasis living in indigenous communities in a region of southeastern Colombia called the Vaupés department, which is part of the Amazon basin. The patients were seen over a period of 12 weeks at a hospital in the city of Mitú, the only hospital in the region.

Most of the patients were elderly (ages 69 to 94); lived in extreme poverty; and had underlying conditions, such as osteoarthritis, that prevented them from moving around a lot.

The patients each had from 400 to 1,300 sand fleas embedded in their skin. The fleas were not only in the people's feet, but also in their knees, elbows, hands and fingers. All of the patients either had difficulty walking or were completely immobile when they were taken to the ER. Most had lost weight and muscle, weighing less than 80 lbs. (36 kilograms). All of the patients also had bacterial infections in their lesions.

A number of factors appeared to put the patients at risk for severe sand flea infections. The people were elderly, which meant they often had poor vision and weren't able to remove initial sand fleas with sharp instruments, as is commonly done in the area. Problems with mobility led them to stay in the same spot for hours at a time — often in a hammock close to the ground — where they could have contact with soil and get reinfected with fleas. And due to extreme poverty, the patients' family members had difficulty caring for them.

Although the new report is small, with just five cases, "it identified a pattern of characteristics which together determine [how] a self-limiting skin infection develops into a life-threatening disease," wrote the study authors, from the Vaupés Health Department.

The patients were treated with a medicine known as dimeticone, an oil that has been previously used to treat head lice. The report shows that this treatment is effective in killing hundreds of sand fleas, the authors said. After treatment in the recent cases, the patients recovered rapidly and could attempt to walk again.

"Dimeticone should be made available to treat patients in an early stage of disease to avoid life-threatening sequels," the authors concluded.