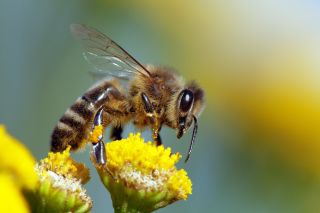 Bees don't just buzz around and make honey; they also do math problems in their free time that would stump the average 4-year-old.

Last year, a group of researchers in Australia reported that bees understand the concept of "zero." Now, a new study by the same group suggests that the insects can also do basic addition and subtraction. The team reported its findings today (Feb. 6) in the journal Science Advances.

A couple of decades ago, scientists thought that such higher-level processing was limited to human and some other primate brains. But then, researchers looked a bit closer, finding that dolphins could understand what zero meant and that Alex the parrot (and even some spiders) could do basic arithmetic.

The findings called into question the "position that there's something special about the human brain," said the new study's senior author, Adrian Dyer, an associate professor at RMIT University in Melbourne, Australia. [The 5 Smartest Non-Primates on the Planet]

And then came the honeybees.

The brains of these insects have just under 1 million neurons, compared to around 86 billion neurons in human brains. The bees have a "very small brain and a very different brain architecture to our own," Dyer told Live Science. Yet, they perform tasks once thought to be possible only in humans.

For their new study, Dyer and his team recruited 14 honeybee students. The snack-seeking bees would enter a Y-shaped maze where they would see from one to five shapes that were either blue or yellow. The bees then had a choice to fly to the left or right side of the maze, with one side containing one more element and the other containing one less.

The researchers wanted the bees to complete a specific task: If the shapes were blue, the bees needed to add an element; if yellow, they had to subtract. The researchers rewarded the bees with sugar water when they chose correctly and punished them with a bitter-tasting quinine solution if they got something wrong.

After 4 to 7 hours of training, the researchers repeated the challenge to test the bees' knowledge, but without using the punishment or reward. In two addition and two subtraction tests, the bees chose the correct answer 60 to 75 percent of the time, the researchers found.

So … why in the world are bees doing math?

One possibility is that they evolved this ability because they're processing a lot of complex information in their environment as they go from flower to flower collecting pollen and nectar, Dyer said. Another is that they have a lot of "neuroplasticity," meaning new connections can easily develop among neurons in bees' brains. In other words, bees aren't normally doing math, but their brains are flexible enough to learn a new skill, similar to how humans can learn to do a Rubik's cube or learn an instrument, Dyer said.

If you look at a textbook, it will say that children around age 4 or 5 can learn how to do a similar level of math, Dyer said. But that doesn't mean kids can't learn it earlier; that's just when they're typically taught it by the school system, he added. (And to be fair, adding or subtracting 1 is a far cry from solving more-complex addition and subtraction problems, such as 9 minus 5 or 2 plus 8, problems a typical 4-year-old might grasp.)

So, if bees can go add and subtract 1 from a number, can they go beyond that and perform serial math operations, such as 2 plus 1 plus 1?

Dyer said he hopes to find out. It looks like the honeybee students will have more class work to do.