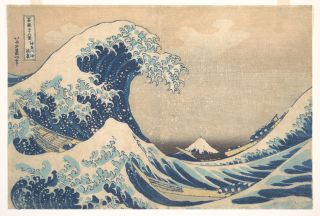 It takes a perfect storm to generate a freak wave, a wall of water so unpredictable and colossal that it can easily destroy and sink ships, a new study finds.

Take, for instance, the Draupner freak wave, which struck on Jan. 1, 1995, near the Draupner Oil Platform off the coast of Norway. That wave reached an incredible 84 feet (25.6 meters) tall, or about the height of four adult giraffes stacked on top of one another. Another famous rogue wave is depicted by Japanese artist Katsushika Hokusai in his19th-century woodblock print called "The Great Wave," which shows an enormous surge of water moments before an inevitable crash.

To figure out why these freak waves appear so suddenly and without warning, an international team of researchers from England, Scotland and Australia reproduced a scaled crest of the Draupner wave in a lab tank. [In Photos: Check Out These Monster Waves]

The team successfully decoded the rogue wave's recipe: It simply needs two smaller wave groups that intersect at an angle of about 120 degrees, they found.

The discovery shifts scientists’ understanding of freak waves "from mere folklore to a credible real-world phenomenon," study lead researcher Mark McAllister, a research assistant in the Department of Engineering Science at the University of Oxford in England, said in a statement. "By recreating the Draupner wave in the lab, we have moved one step closer to understanding the potential mechanisms of this phenomenon."

When ocean waves break under typical circumstances, the fluid velocity (the speed and direction of the water) at the top of the wave, known as the crest, exceeds the velocity of the crest itself, McAllister told Live Science in an email. This causes the water in the crest to overtake the wave, and then crash downward as the wave breaks.

However, when waves cross at large angle (in this case, 120 degrees), wave-breaking behavior changes. As waves crisscross, the horizontal fluid velocity under the wave crest gets canceled out and so the resulting wave can grow taller and taller without crashing. "Thus plunging breaking no longer occurs and upward jet-like breaking, as illustrated in our video [see below], occurs. And, seemingly, this second type of breaking does not limit wave height in the same way," McAllister said.

In other words, when waves cross at large angles, they can create monster waves like the Draupner freak wave and Hokusai's Great Wave.

However, wave groups don't necessarily need to meet at a precise angle of 120 degrees to go rogue.

"In the case of the Draupner wave, the angle of 120 degrees is what was necessary to support such a wave," McAllister said. But "more generally speaking, any amount of crossing in the oceans will support steeper waves."

The finding illustrates "previously unobserved wave-breaking behavior, which differs significantly from current state-of-the-art understanding of ocean wave-breaking," study senior author T. S. van den Bremer, an associate professor in the Department of Engineering Science at the University of Oxford, said in the statement.

The team hopes that their work will lay the groundwork for future studies that may one day help scientists predict these potentially catastrophic waves, they said.

The wet and wild experiments were done at the FloWave Ocean Energy Research facility at the University of Edinburgh.

"The FloWave Ocean Energy Research Facility is a circular combined wave-current basin with wavemakers fitted around the entire circumference," Sam Draycott, a research associate in the School of Engineering at the University of Edinburgh, said in the statement. "This unique capability enables waves to be generated from any direction, which has allowed us to experimentally recreate the complex directional wave conditions we believe to be associated with the Draupner wave event."

The study will be published in the Feb. 10 issue of the Journal of Fluid Mechanics.