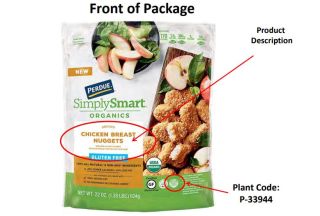 Perdue Foods is recalling nearly 50,000 bags of the company's organic gluten-free chicken breast nuggets because they may be contaminated with wood pieces.
(Image: © USDA)

More than 68,000 pounds of frozen chicken nuggets are being recalled because they may contain a not-so-tasty ingredient: wood pieces.

On Thursday (Jan. 17), Perdue Foods announced the recall, which involves the company's organic gluten-free chicken breast nuggets, sold under the brand "Perdue SimplySmart Organics," according to a statement from the U.S. Department of Agriculture (USDA).

Purdue received complaints from three consumers of wood pieces being found in the product, according to the USDA statement. In addition, one complaint was reported to the USDA's Food Safety and Inspection Service.

People who bought the recalled product should not consume it, and they should contact Perdue Foods for a full refund, the company said in a statement.

Wood pieces are far from the most bizarre material to be found in processed food. In 2017, McCain Foods USA recalled some of its hash-brown products because they may have contained pieces of golf balls. Also in 2017, a salad product from Fresh Express was recalled because a dead bat was found in a single packaged salad.

In the company's statement, Jeff Shaw, vice president for quality assurance at Purdue, said the company believes only a small number of the nearly 50,000 recalled packages have the potential to contain wood pieces. But "out of an abundance of caution, we have decided to recall all packages of Perdue SimplySmart Organics Gluten Free Chicken Breast Nuggets produced during the same product run."

So far, there have been no reports of injuries tied to the recalled chicken nuggets.