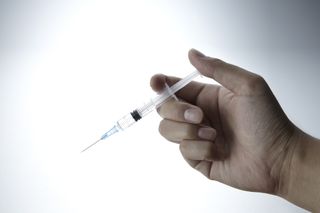 Talk about toxic masculinity: An Irish man wound up with a serious skin infection after injecting himself with his own semen, according to a recent report of his unusual case.

The 33-year-old told doctors that he had been giving himself monthly semen injections to "cure" his long-standing back pain, the report said. Needless to say, semen does not cure back pain.

In this case, the man had initially sought medical care after he'd injured his back lifting a heavy object three days earlier. It wasn't until doctors gave the man a physical exam and noticed that his right forearm was red and swollen that the man admitted to regularly injecting himself with semen. [27 Oddest Medical Case Reports]

The man had most recently given himself three "doses" of semen, intravenously and intramuscularly. But the semen had pooled in the soft tissue of the man's forearm, leading to a bacterial infection called cellulitis. Over a 24-hour period, the doctors noted, the swelling spread from the initial site of injection to cover most of the man's forearm.

To treat the infection, the man was given intravenous antibiotics. During his hospital stay, his back pain improved.

The case report authors noted that there were no other reports in the medical literature of people injecting semen intravenously. What's more, the doctors couldn't find mention of semen injections on nonscientific sites either. "A search of more-eclectic internet sites and forums found no documentation of semen injection for back pain treatment or other uses," the authors wrote. Rather, the patient "devised this 'cure'" completely on his own.

Still, the case is educational, even for those who do not plan on injecting themselves with semen (and please, do not plan on doing this): The case highlights the dangers of intravenous injections when carried out by untrained individuals, as well as the risks surrounding the attempted injections of substances not intended for intravenous use, the authors wrote.

The case was published in the January issue of the Irish Medical Journal.