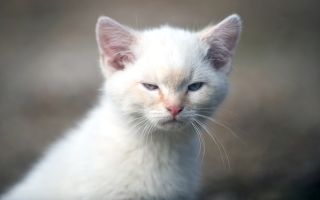 Outdoor cats can be exposed to harmful bacteria — including plague — through interactions with infected wildlife (the cat pictured is not suffering from plague).
(Image: © Shutterstock)

A house cat in Wyoming was recently diagnosed with bubonic plague; it is now the third feline in the state found to have contracted the deadly disease in the past six months.

While the word "plague" conjures images of epidemics wiping out medieval communities in their entirety, the bacterial infection actually occurs naturally in wild rodents (and their fleas) in the western U.S. and rarely affects people, according to local health officials. Prairie dogs are common carriers of the disease. [Pictures of a Killer: A Plague Gallery]

The cat, named Kaycee, was "known to wander outdoors," representatives with the Wyoming Department of Health (WDH) said in a statement on Jan. 4. Kaycee's roaming habits likely exposed it to an animal that was already infected with the plague-causing bacterium Yersinia pestis, which is typically transmitted between animals through flea bites, according to the Centers for Disease Control and Prevention (CDC).

Once called "the Black Death" and "the great pestilence," plague emerged from Asia and decimated Europe during the 14th century, wiping out an estimated 33 percent to 50 percent of the population. Plague then traveled to North America and Australia in 1900, and today, plague is found on every continent except Antarctica, Live Science previously reported.

There are, on average, seven cases of plague in people each year in the U.S., and the death rate is 11 percent, the CDC says. The infection is curable with antibiotics if caught early.

Humans can become infected with plague through contact with sick animals or through bites from infected fleas, Dr. Alexia Harrist, state health officer and state epidemiologist with WDH, said in the statement. Now that a third infected cat has been identified, Wyoming officials are taking steps to make sure that people stay safe, according to Harrist.

"We are letting people know of the potential threat in the cat’s home area as well as across the state," she said.

Precautions recommended by WDH include applying flea repellent to pets, and to boots and pants when visiting places that might house fleas. Wild rodents — dead or alive — should be avoided, as well as any location where large numbers of rodents have died suddenly, according to the WDH.

Officials have not released further updates on Kaycee's health status since the infection was first reported.