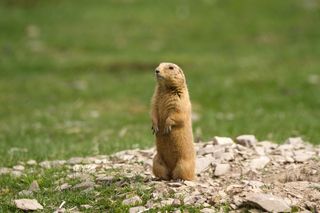 Yes, there's a vaccine for the plague, one of the most notorious diseases known to humanity. But unfortunately, this vaccine isn't for humans — it's for prairie dogs.

Since 2016, however, the scientists — a team of collaborators from the U.S. Fish and Wildlife Service (FWS) and researchers from the National Wildlife Health Center (NWHC) — have honed their vaccine distribution methods, using all-terrain vehicles in addition to drones to deliver the lifesaving drug to the prairie dogs. [10 Deadly Diseases That Hopped Across Species]

Plague is caused by the flea-borne bacterium Yersinia pestis. In prairie dogs and other rodents, the bacterium causes a disease called sylvatic plague; in humans, the same bacterium causes bubonic plague, which, if not treated with antibiotics, can be deadly.

But saving prairie dogs from the plague isn't the end goal of the vaccination program. Instead, the scientists are immunizing prairie dogs with the hope of protecting the rodents' primary predator: the endangered black-footed ferret.

The vaccine has been distributed "very specifically" to areas "where endangered, captive ferrets have been reintroduced into colonies with active prairie dog populations," said Katherine Richgels, the applied wildlife health research branch chief at the NWHC.

So far, these vaccination efforts have paid off: "In some trials over the past five years, we had enough plague come through that we did see improvements in prairie dog survival," Richgels said.

According to Dan Salkeld, a disease ecologist at Colorado State University who specializes in plague, prairie-dog survival is the crux of this vaccine work. The maintenance of prairie-dog populations equals the conservation of the black-footed ferret, one of the most endangered carnivores in the U.S., Salkeld told Live Science.

But what about people?

The results spell good news for prairie dogs and ferrets alike. However, experts are divided on whether the vaccine will eventually translate to protection in humans. Salkeld said he doesn't yet anticipate a promising future for the prairie-dog plague vaccine's impact on humans.

"I don't know that there will be much of an impact on humans, just because it is such a rare disease in the first place," he said. "The main sources of [plague] infection include chipmunks, rats and squirrels. Perhaps the prairie dog vaccine has the potential to work on these other animals."

Other experts, however, disagree. Indeed, there has been some discussion about the effectiveness of the vaccine on other species that live in closer proximity to humans, such as wood rats and rock squirrels, Richgels told Live Science. These animals are more likely than prairie dogs to spread the disease to humans. [27 Devastating Infectious Diseases]

"We think this vaccine could be effective on these species," Richgels said. "We've speculated, but to know for sure, we'd have to do additional testing to make sure the vaccine was effective, and we'd have to have some public health groups that were willing to try this."

In places like Madagascar, where bubonic plague occurs nearly every year, a plague vaccine that works on animals capable of transmitting plague to humans could be particularly helpful, Richgels said. In other words, by vaccinating animals who could spread plague to humans, it's possible to potentially reduce the spread of plague to humans.

But that doesn't mean this zoonotic, or animal-based, plague vaccine has the capacity to eradicate the disease in humans. The 2,348 cases of plague during last year's outbreak in Madagascar won't suddenly drop down to zero this year.

"It's a complex disease; it's unpredictable. And so I think going for eradication would be really difficult," Salkeld said. "It's not easy, generally, to eradicate human-animal disease. The best management approach is to make an impact in parts."

In the U.S., Salkeld emphasized that distributing the plague vaccine to prairie dogs, specifically across the entire American West — which sees five to 10 plague cases during a busy year — will most likely not be a public health priority.

Thus, the goal for these scientists is to make a difference where they can, even if that doesn’t mean total eradication.

Richgels said that while a zoonotic plague vaccine may not ultimately rid the world of plague, it could be an effective management tool when used in specific instances, such as in the event of an outbreak, particularly in places like Madagascar. But for now, the NWHC and the FWS have more immediate goals.

"We want to be able to say that black-footed ferret populations recovered," Richgels said. "We want a success story — not just in captivity, but also in the wild."