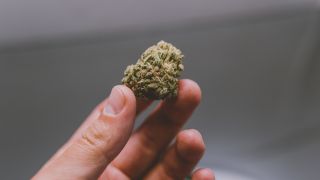 Recreational marijuana use is becoming increasingly legal across the U.S., but that doesn't mean that it's safe. As with alcohol and tobacco, the drug comes with risks. And a new study finds regular marijuana may — similar to alcohol and tobacco — affect a man's sperm count and vitality.

While the study was small — just 24 participants — researchers found, for the first time, that higher concentrations of tetrahydrocannabinol (THC) in urine corresponded to a lower sperm count. (THC is the compound in marijuana responsible for the drug's high.) The study also found that pot smokers had changes in their sperm genetic profile that, in other studies, have been associated with abnormal growth and cancer.

The study, which was published today (Dec. 19) in the journal Epigenetics, could not determine whether these changes in sperm quantity and quality could affect the fertilization process and the health of the offspring, but the researchers advise caution nonetheless. [25 Odd Facts About Marijuana]

"In the absence of a larger, definitive study, the best advice would be to assume these changes are going to be there [in sperm]," said lead author Susan Murphy, the chief of the Division of Reproductive Sciences in the Department of Obstetrics and Gynecology at Duke University Medical Center in North Carolina. "I would say, as a precaution, stop using cannabis for at least six months before trying to conceive."

Previous studies have hinted that smoking marijuana can lower sperm count, that is, the number of sperm in semen when ejaculated. The new study, however, is the first to show a strong correlation between THC concentrations in urine and the number of viable sperm. On average, the sperm concentration in the semen of the 12 non-smokers in the study was about twice as high as it was in the 12 smokers, the study revealed.

More worrisome for the researchers was the degree of epigenetic changes among pot smokers. Epigenetics refers to the suite of small chemical "tags" that are added to the DNA structure and regulate gene expression. While this is a normal process, it can be altered by environmental exposures.

The researchers found that the men who smoked marijuana had epigenetic changes in their sperm DNA involving hundreds of genes and two important regulatory pathways: one for helping bodily organs reach their full size; the other for basic growth during development. Several kinds of cancer are associated with the interference of these pathways, though this study did not find a specific link between marijuana use and cancer.

As with sperm count, the higher the concentration of THC in the men's urine, the more pronounced the epigenetic changes to their sperm were. The research group's corresponding study on rats revealed a similar pattern in the same group of genes.

"We don't yet know what that means, but the fact that more and more young males of child-bearing age have legal access to cannabis is something we should be thinking about," senior study author Scott Kollins, a professor in psychiatry and behavioral sciences, also at Duke, said in a statement.

Changes in sperm quantity and quality induced by marijuana smoking might not be permanent, Murphy told Live Science. Men generate new sperm daily. Sperm take about 70 days to mature and then, if not ejaculated, will die shortly after that and be reabsorbed into the body.

"The sperm DNA… is not mutated in the traditional sense" by marijuana, Murphy said. "By definition, epigenetic alterations can affect gene regulation without changing the DNA sequence.

This means that, in the absence of marijuana use, new sperm may be able to develop normally. Nevertheless, damaged sperm from marijuana use could theoretically adversely affect the offspring, "assuming that said sperm is viable, capable of fertilization and results in a viable embryo," Murphy added.

Tim Jenkins, an epigenetics and male fertility expert at the University of Utah School of Medicine, who was not involved in the study, told Live Science that "despite the limited sample size in this study, a real strength are the animal data which comport remarkably well with the human data," which "makes the results significantly more convincing."

However, Jenkins stressed the importance of addition research. "It is imperative that additional work is performed in this realm to identify the real risk of cannabis use on sperm function but most importantly, on offspring health," he said. "This study represents a great first step in that effort, but there is still a great deal of work that is required.”

For their next study, Murphy said they'd like to at least double the sample size to improve the statistical significance of the results.