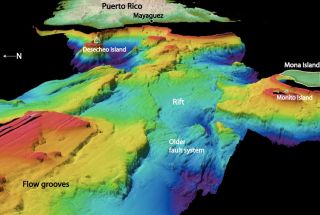 In the 1940s, Navy scientists were forbidden from sharing key oceanographic data, such as bathymetric measurements, with scientists who lacked a security clearance. Here, the bathymetry of Mona Passage from the U.S. Geological Survey.
(Image: © USGS)

WASHINGTON — Military secrecy in the U.S. Navy after the end of World War II severely limited scientists' access to data about the ocean floor and subsequently delayed the development of an important scientific theory — plate tectonics — according to research presented Dec. 11 here at the American Geophysical Union (AGU) meeting.

It is widely accepted that ocean-exploration missions performed by the U.S. Navy formed the foundation for the theory of plate tectonics, which describes the movement of Earth's crustal plates as they coast atop the viscous mantle, according to presenter Naomi Oreskes.

But the Navy's efforts may have been more of a hindrance than a help, said Oreskes, a professor of the history of science and an affiliated professor of Earth and planetary sciences at Harvard University. [Flying Saucers to Mind Control: 22 Declassified Military & CIA Secrets]

In fact, evidence strongly suggests that scientists had already laid the groundwork for figuring out plate tectonics as early as the 1930s. The only reason that the theory didn't gel until decades later is because much of the seafloor data at the time was gathered by Navy missions — and officials refused to declassify their findings.

Beginning in the late 1930s, the U.S. Navy took an active interest in pursuing ocean research for military purposes. In doing so, the Navy reshaped the field in America, focusing most of its resources on studying the physical characteristics of the ocean — such as using sonar to map the ocean floor — rather than on exploring biological or chemical oceanography, Oreskes said.

Until about 1938, scientists in the U.S. were exploring the fundamentals of what would eventually become the theory of plate tectonics, which recognizes the rigidity of the outer layer of Earth (the crust), links volcanism and earthquakes to crustal motion, and even estimates its rate of movement.

All that progress came to a halt with World War II. And scientists who signed on to work with the U.S. Navy found that not only was their work designated as classified for the duration of the war — the secrecy continued even after the war ended, according to Oreskes. They were forbidden from sharing key oceanographic data, such as bathymetric, or depth, measurements, with scientists who lacked a security clearance.

Scientists at the time called it "the Navy's Iron Curtain," Oreskes told the audience at the presentation.

Limiting ocean data access to only a handful of people on a "need to know" basis greatly reduced the scientific community's chances of seeing important scientific breakthroughs, Oreskes said.

"Great discoveries are rare, and this policy makes sure they won't be made, by the simple procedure of limiting factual information to a few men," she explained.

It wasn't until the 1960s that an American scientist named Henry Hess made a dramatic breakthrough related to plate tectonics, with his theory of seafloor spreading — a process that forms new oceanic crust along ridges, through volcanic activity. Hess, a professor of geology at Princeton University in New Jersey, had served in the Navy during WWII, and he strongly criticized the Navy's secrecy concerning ocean data.

The work that Hess resumed in the 1960s was nearly identical to the work he was doing in 1938, suggesting that no new data had been available to him during the interim, Oreskes said. And Hess resumed his work in response to research published by British colleagues, "which prompted him to dust off his ideas from the '30s," she added.

The presentation was excerpted from her forthcoming book, "Science on a Mission: American Oceanography from the Cold War to Climate Change" (University of Chicago Press).