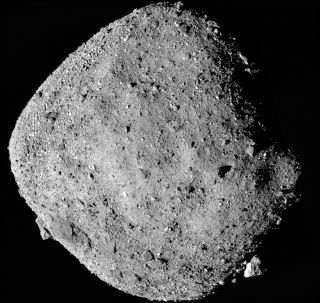 This mosaic image of asteroid Bennu is composed of 12 PolyCam images collected on Dec. 2 by the OSIRIS-REx spacecraft from a range of 15 miles (24 kilometers).
(Image: © NASA/Goddard/University of Arizona)

It looks like NASA chose the right space rock for its asteroid-sampling mission.

The discovery suggests that liquid water was once plentiful in the interior of Bennu's parent body, which scientists think was a roughly 62-mile-wide (100 kilometers) rock in the main asteroid belt between Mars and Jupiter. (Bennu is likely a pile of rubble that coalesced after a massive impact shattered that larger object hundreds of millions of years ago.) [OSIRIS-REx: NASA's Asteroid-Sampling Mission in Pictures]

OSIRIS-REx's main goal involves helping scientists better understand the solar system's early days and the role that asteroids like Bennu may have played in delivering water and the chemical building blocks of life to Earth. So, the water find is big news for the mission team.

"We targeted Bennu precisely because we thought it had water-bearing minerals and, by analogy with the carbonaceous chondrite meteorites that we've been studying, organic material," OSIRIS-REx principal investigator Dante Lauretta, of the University of Arizona, said today during a news conference at the annual fall meeting of the American Geophysical Union in Washington, D.C.

"That still remains to be seen — we have not detected the organics — but it definitely looks like we've gone to the right place," Lauretta added.

The $800 million OSIRIS-REx mission (whose name is short for "Origins, Spectral Interpretation, Resource Identification, Security-Regolith Explorer") launched in September 2016 and began its Bennu-approach phase in mid-August of this year.

Measurements made over the past four months by the spacecraft's two onboard spectrometers revealed the presence of molecules containing hydroxyls — bonded-together oxygen and hydrogen atoms — on Bennu, Lauretta and fellow team members announced today. Mission scientists think these hydroxyls are widespread across the asteroid, locked into clay minerals.

Scientists also announced today that OSIRIS-REx's observations pretty much confirm Bennu shape models devised a half-decade ago by researchers using radar data gathered by the Arecibo and Goldstone dishes here on Earth. That's good news, Lauretta said, because the mission team drew up its plans based on those earlier shape models.

In addition, NASA today released OSIRIS-REx's best look at Bennu to date. The dazzling photo, taken on Dec. 2 just before the spacecraft's official asteroid arrival, shows Bennu in unprecedented detail and highlights the rugged nature of its surface. (Arrival is different than orbit, by the way; OSIRIS-REx won't begin circling Bennu until Dec. 31.)

Bennu is littered with boulders, to an extent that Lauretta and his colleagues deemed surprising. The biggest of these jutting rocks is about 165 feet tall by 180 feet wide (50 by 55 m), mission team members said.

The abundance of these obstacles means the OSIRIS-REx team must plan out its sample-grabbing activities in great detail and with great care. But that's fine, team members said, because there's still plenty of time to choose and characterize a sampling site; OSIRIS-REx isn't scheduled to snag any Bennu bits until July 2020.

This material will come down to Earth in a special return capsule in September 2023. Scientists around the world can then scrutinize the sample with a variety of laboratory equipment, making observations that address the main mission goals as well as a variety of other questions.

For example, the mission could help researchers better understand the resource potential of Bennu-like asteroids — whether they contain enough accessible water to support in-space mining operations. And OSIRIS-REx's measurements at Bennu will reveal key details about the forces that affect asteroids' paths through space, which should help fine-tune predictions of the trajectories of potentially hazardous space rocks, NASA officials have said.

"We have an awesome asteroid to explore," Lauretta said. "It's a dream come true, and it's an honor and a privilege to be able to lead a program like this for NASA and for the United States and, really, for the world."