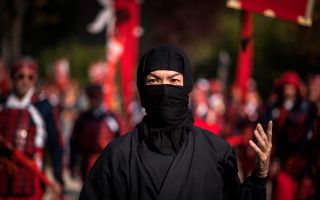 A ninja recently took part in an event during an October festival in Paris dedicated to Japanese culture.
(Image: © Lionel Bonaventure/AFP/Getty)

A ninja oath, recently found in a centuries-old document in Japan, reveals how an aspiring ninja was sworn to secrecy about 300 years ago.

The ninja who penned the vow used cursive calligraphy to make a pledge to never reveal what he was taught, on pain of his descendants suffering divine wrath for generations, Agence France Presse (AFP) reported.

Experts can only guess if the ninja, who signed the document "Inosuke Kizu," kept that oath to the end of his life. But details in Kizu's solemn vow reveal how serious ninjas were about guarding the secrets of their techniques and abilities, AFP said. [In Photos: The Last Century of Samurai Swordsmen]

Researchers found the oath among 130 ancient documents that were recently donated by the Kizu family, which was once a ninja clan in the town of Iga, near Kyoto. The oath likely was sent to Kizu's relatives after his death, Yoshiki Takao, an associate professor with the International Ninja Research Center at Mie University in Japan, told AFP.

In the vow, Kizu pledged his thanks to the mentor who trained him in "ninjutsu," or "the way of the ninja." The term does not indicate the practice of a specific martial art, according to the Ninja Museum of Igaryu in Iga, Japan. Rather, ninjutsu is a type of "warfare art" specializing in espionage and strategic military attacks.

Popular representations of ninjas in movies, TV and comics emphasize swordplay as well as stealth. However, in reality, ninjas who relied on weapons were seen as "foolish" compared to ninjas who could gather enemy intelligence without being detected, according to the museum.

Kizu affirmed in the oath that he would never use his ninja skills for stealing — unless he was instructed to do so — and that he would never share what he learned with his closest relatives. Any new combat skills or weapons that he acquired, if they were not already known to other ninjas, would be duly reported to his superiors, according to the AFP.

Kizu also swore that if he broke the ninja code of silence, disaster would be visited on his children and grandchildren by "big and small gods in more than 60 provinces across Japan," AFP reported.

Tantalizing hints of a document containing a ninja oath first surfaced in Japan approximately 50 years ago, but this is the first time any evidence of such a testament has surfaced, Takao told AFP.

However, many of the ninjas' historical secrets are likely to remain hidden, much like the stealthy ninjas themselves. Though some aspects of ninja training and discipline were documented and later discovered by researchers, a substantial part of ninja traditions were shared only orally and do not exist in written form, Takao said.