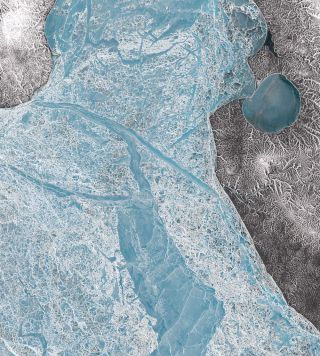 For a small period of time, the remote New Siberian Islands turn into a jigsaw puzzle of fractured ice, as seen in this NASA image captured by the Landsat 8 satellite. The islands are typically completely blanketed in snow for most of the year.
(Image: © NASA Earth Observatory/Lauren Dauphin, using Landsat data from the U.S. Geological Survey and MODIS data from NASA EOSDIS/LANCE and GIBS/Worldview)

Chilling between the Arctic Ocean and Siberia's frigid northern seas, the cluster of rocks known as the New Siberian Islands is so cold and remote that they were once believed to be made entirely of woolly mammoth bones. (They're not, but there are still plenty of mammoth fossils to be found.)

Viewed on foot, the islands are a near-uninhabited canvas of tundra covered in snow roughly three-quarters of the year. But seen from the sky, as in an epic satellite image posted by NASA Earth Observatory on Dec. 1, the bleak islands look entirely different. [The Frozen North: Stunning Images of Russia From Above]

In a photo snapped by the Landsat 8 satellite in June 2016, the Anzhu Islands (a subset of the New Siberian Islands) meet the sea in a giant jigsaw puzzle of cracking ice. According to NASA, it's not unusual for ice to cling to these frosty islands year-round, though "the appearance of this ice can change on a daily basis, altered by currents, winds, and seasonal cycles of freezing and melting."

When above-freezing summertime temperatures briefly free the islands from their regular snow cover, gorgeous ice mosaics like this one emerge for anyone quick enough (and airborne enough) to see them. A few weeks earlier, NASA wrote, and this same landscape would be completely white. A few months later, and the snow would return again for another long, Arctic winter.

Landsat 8 was launched in 2013 in a collaboration between NASA and the U.S. Geological Survey. According to NASA, the satellite images the entire Earth every 16 days.