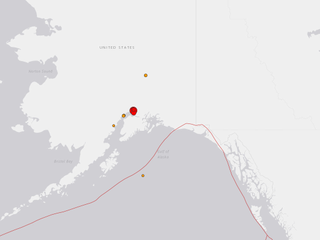 A U.S. Geological Survey map shows the location of the earthquake and aftershocks. The biggest dot is the 7.0 quake.
(Image: © USGS)

A significant earthquake rocked Anchorage, Alaska at 8:29 a.m. local time today (Nov. 30). The U.S. Geological Survey (USGS) initially reported that the quake had a magnitude of 6.6, but later updated that to 7.0. The epicenter was 8 miles (13 kilometers) north of Anchorage, and a tsunami warning has been issued for the region.

[Update, 2:10 p.m. EST: The tsunami alert for Alaska was canceled at 9:59 a.m. local Anchorage time, according to a tweet posted by the the U.S. National Tsunami Warning Center on Twitter.]

Locals have shared images and video on social media that appear to show the quake and its aftereffects, however, Live Science has not independently confirmed their authenticity.

Reporter Cassie Schirm shared this image of the damage to the KTVA newsroom.

USGS reported several aftershocks in the region, which Braverman and others in the area also reported feeling.

Earthquakes, as Live Science has previously reported, occur when pressure built up along fault lines in the Earth's crust gets released, and the crust slips along the fault, moving the Earth above. Tsunamis can sometimes result when that movement pushes on ocean water, causing it to shift toward land. Earthquakes are somewhat common in the Anchorage area, and this is not the largest earthquake it's experienced in living memory. Anchorage saw an enormous 9.2 magnitude earthquake back in 1964.