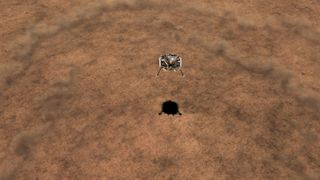 Tomorrow, humanity will once again reach out and touch the surface of a foreign world. After seven months traveling across our solar system, NASA's InSight Lander is scheduled to touch down on the flat plains of Elysium Planitia on Mars on Monday at 3 p.m. ET.

But though this landing is taking place 91 million miles away from Earth, people on this planet will still have the opportunity to watch the historic event.

Here's how you can watch, from the comfort of planet Earth: NASA TV will be broadcasting the landing live online between 2 p.m. and 3:30 p.m. ET on Monday (Nov. 26). You can also watch the landing on other sites such as Facebook and Space.com.

NASA also has a list of viewing parties that are set to take place across the U.S., including ones in Times Square and at the American Museum of Natural History in New York; at the California Science Center in Los Angeles; and at the Adler Planetarium in Chicago. Internationally, there will be some viewing parties in France, Germany and on the Ile de la Réunion. See the full list here.

Here's what should be happening: The InSight (or "Interior Exploration using Seismic Investigations, Geodesy and Heat Transport") lander will push through Mars' thin atmosphere using small rockets, deploy parachutes to slow its fall to the surface, and then use retro rockets to finally stick the landing. It will take about 6 minutes from the time  the lander reaches the Martian atmosphere until it touches down on the surface of the Red Planet. (Of course, this is if everything goes according to plan: For example, the lander may face dust storms in the northern hemisphere where it's aiming to land. According to NASA, these autumn Martian storms have grown larger in recent years.

Here's what you'll see: A bunch of NASA commentators and most likely some mock-up landing footage, because, let's face it, there's barely reception in some places of our own planet. Because of the difficulty communicating between planets, NASA may not even know if the landing was successful or not until several hours after the scheduled landing time.

When InSight lands, it will set off a radio signal called a "tone" that radio telescopes on Earth will try to detect. If the craft is healthy and functioning, 7 minutes after landing, it will send a louder beep, according to NASA.

The Mars newcomer will be greeted by NASA's orbiting Mars Odyssey, which will snap some photos, as might two experimental spacecraft flying behind InSight. All of these machines, plus something called the Mars Reconnaissance Orbiter that serves as a sort of aircraft "black box," will feed clues about InSight's success or failure back to Earthlings.

If all goes smoothly, the InSight lander will spend its life on this foreign land listening to its native music — vibrations beneath the surface of the planet, or "marsquakes," to understand how rocky planets, including our own, formed.