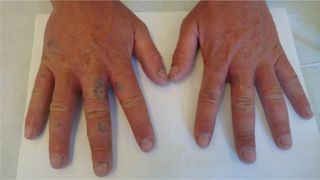 A midnight sun can evoke many images, including those of an endless night and a beautiful, soft light — but a really awful sunburn probably isn't one of them.

A man, a 29-year-old tourist from Australia, learned just that while hiking in Greenland for several weeks. He didn't think much of it when he squeezed two limes into his water bottle during the trip, according to a report of the man's case. But, two days later, he was surprised to find "small, purple marks on the top side of my fingers and hands," he wrote in the report, published online Nov. 8 in the journal BMJ Case Reports.

The purple marks turned into pus-filled blisters that burned and itched. Soon, the wounds "were looking pretty bad, almost like rotten 'zombie' skin," the man wrote. After rushing to the hospital, he learned that his blisters were the result of a bizarre chemical reaction between the light-sensitive compounds found in limes, and ultraviolet (UV) rays from the midnight sun. [Here's a Giant List of the Strangest Medical Cases We've Covered]

The condition, known as phytophotodermatitis, means "plant" (phyto), "light" (photo) and "skin inflammation" (dermatitis) in Greek. It happens when a light-sensitive compound called psoralen, found in lime juice, gets on a person's skin, and is activated by the sun's UV light, said case report co-author Dr. Luit Penninga, a surgeon and the medical director of the Ilulissat Hospital and the Avannaa Health Region in North Greenland. And that's precisely what happened to the man.

"When you get lime juice on your hands or on other parts of the skin and afterwards [go] into the sun, a chemical reaction occurs which results in very severe skin damage and blister formation," Penninga told Live Science in an email.

Limes aren't the only plant products known to cause phytophotodermatitis. Other citrus plants, as well as celery, figs, meadow grass, wild parsnip, certain weeds — including giant hogweed — and oil of bergamot contain photosensitizing compounds, the researchers wrote in the case report. "We know of reports of bartenders in exotic places who worked in the sun all day preparing drinks with lime juice, and they developed severe blisters and skin damage," Penninga said.

Even Arctic Greenland has a variety of wild flowers and shrubbery, including a wild celery known as kvan (Angelica archangelica), that can lead to UV-activated burns, the researchers wrote in the report. At first, the man's doctors wondered if one of these plants had caused the blisters, but the man said he hadn't touched any of them.

Rather, the man divulged the missing puzzle piece in a follow-up discussion with the doctors: In an attempt to get enough vitamin C during his camping trip, he had squeezed fresh limes into his drinking water. There hadn't been enough water around to wash his hands, so he went on his merry way, spending at least 10 hours of day hiking in the intense Greenland summer sun.

"Even though we are in Northern Greenland, the sun can be strong in the summer," Penninga said. "The sun is shining 24 hours a day here in the summer, north of the Arctic Circle, while in the wintertime it is dark all day round for a couple of months."

The doctors lanced and bandaged the man's blisters, gave him antibiotics to prevent bacterial infections and recommended that he wear gloves to protect his hands from the sunlight. The man later reported that his hands were sore and itchy for another four weeks, but within two months he had largely recovered.