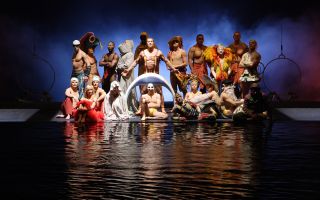 A team of neuroscientists recently collaborated with the troupe to find out. The researchers tracked brain waves of audience members during Cirque du Soleil shows in Las Vegas, looking for any indication of awe in people's brain waves, study leader Beau Lotto, a neuroscientist specializing in human perception, said yesterday (Nov. 7) at a press event here in New York City.

The findings, which were not peer-reviewed, suggested that there were distinct "awe signatures" in the subjects' brain waves, and these readings corresponded with 23 awe-inspiring moments in Cirque du Soleil's performance, Lotto said. [10 Surprising Facts About the Brain]

At the New York event, I found out firsthand what it feels like to watch Cirque du Soleil while a device tracked my brain activity.

I joined a small group of reporters who donned electroencephalogram (EEG) headgear and watched footage of Cirque du Soleil's Las Vegas performance. At the same time, we could also see a real-time readout of our brain activity on laptops.

However, the headset signals were less accurate than those produced by the more-sensitive caps that the team had used in Las Vegas, and no data was collected from the screening session, Lotto told the participants.

At the shows in Las Vegas, the researchers used head-covering caps and gel-coated sensors to monitor EEG signals — which show electrical activity across the entire brain — in 60 audience members. Scientists monitored the subjects as the audience members watched acrobats flip, tumble and soar through the air.

EEGs present a general overview of brain activity, unlike technology such as functional magnetic resonance imaging (fMRI), which images the firing neurons in specific brain regions. Because fMRI can target brain areas that are associated with emotional responses, scientists have used these scans to pinpoint what certain emotions look like in the brain, in real time.

Some emotions — fear, joy and sadness, for example — are fairly easy to describe. But awe can be difficult for people to put into words, Lotto said. Typically, awe is defined by a sense of wonder and curiosity, feelings of connection to others, and a transformed view of the world and one's place in it, a feeling that persists even after the awe-inspiring event ends, he explained.

Identifying awe in Cirque du Soleil audiences required fleshing out their EEG readings with additional data, Lotto's neuroscience group, Lab of Misfits, said in a statement. In addition to taking the brain readings, the scientists also collected information about feelings of awe from 280 audience members — including those wearing the caps — through psychological and perception experiments performed before, during and after the show.

Then, the researchers turned to artificial intelligence (AI) to review the data and analyze subjects' brain waves. The researchers found that AI could interpret the EEG readings to spot patterns that coincided with subjects' self-reporting of the experience of awe; after repeatedly identifying that signature pattern, the AI learned to find the awe signal amid the brain-wave noise, according to the statement.

Studying awe and understanding how it works are important for neuroscientists, because more than any other emotion, awe may have been a guiding force in human evolution, Lotto said.

"What's the fundamental challenge that the brain evolved to solve? It's the challenge of uncertainty. We hate uncertainty — almost every behavior is an attempt to decrease it," Lotto said. However, learning from and adapting to new experiences is also an important component of evolution — and that involves exposure to uncertainty, he added.

"The hypothesis we're testing is that maybe awe is evolution's solution to stepping forward into uncertainty, to help us step into that place in order to see things differently," Lotto said. "Because if we don't, we don't evolve."

The Lab of Misfits plans to submit its findings to a peer-reviewed journal, Lotto added.