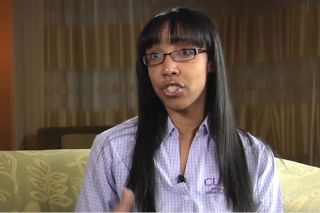 Shaundra Daily is a pioneer in the field of affective computing.
(Image: © NSF.)

Most people rely on computers for varied technical tasks such as transmitting messages, spellchecking documents and videoconferencing, without even considering the possibility that these machines might be able to help them sort through their emotions.

But, increasingly unconstrained by the limits of their lifeless, emotionless construction, computers are being used more and more to improve our understanding of human emotions. This trend is due, in part, to the work of Shaundra Daily, who — for most of her career — has been helping to advance a field called affective computing. Affective computing involves developing computer technologies that can be used to help recognize, process and stimulate human emotions.

Daily, who is assistant professor in Clemson University's school of computing and director of its Interpersonal Technology Lab, was first introduced to affective computing while she was a part of MIT's Media Lab doctoral program. Daily told PBS that for her, affective computing involves creating different learning environments so that children can learn about their emotions and the emotions of others, discuss these emotions and use their resulting knowledge to work effectively together in the future.

Daily is also involved in the Institute for African American Mentoring in Computer Science (iAAMCS, pronounced "I am cs"), which seeks to increase the number of African American computer science doctorates. The National Science Foundation awarded Daily and Juan Gilbert, Presidential Endowed Professor and chairman of the Human-Centered Computing Division at Clemson, a $5 million grant to launch the Institute.

Learn more about Daily and her work in the Science Lives video below.