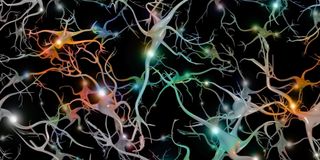 Feelings of sadness or anxiety might be linked to increased "chitchat" between two areas of the brain, a new study suggests.

In the study, published today (Nov. 8) in the journal Cell, a group of researchers listened in on electrical conversations in the brain — in other words, the signals that brain regions send to one another. When a person is feeling down, they found, the communication increased between brain cells in two specific regions of the brain involved in memory and emotion.

It's unclear whether this increased brain communication is a cause or an effect of a bad mood, the researchers noted. However, the findings allowed them to home in on the part of the brain where the action is. [5 Ways Your Emotions Influence Your World (and Vice Versa)]

What is clear, however, is that anxiety, depression and mood have physical manifestations in the brain. "For many patients, it is very important to know that when they are feeling depressed, it is due to something measurable and concrete within their brain," said co-senior study author Dr. Vikaas Sohal, a psychiatrist at the University of California, San Francisco. "For some patients, this can provide important validation and remove stigma, empowering them to seek appropriate treatment."

The researchers carried out the study using a technique called intracranial electroencephalography (EEG). As the word "intracranial" implies, the method involves implanting electrodes or wires inside the skull — in and on the brain. These implanted electrodes record the electrical activity of brain cells (in other words, record their communication).

Previous studies looking at brain activity and mood and emotion were mostly conducted using functional magnetic resonance imaging (fMRI), a type of imaging that measures changes in blood flow to different parts of the brain. But those "are indirect measures of brain activity" and they "cannot measure changes in brain activity that occur on very fast timescales," like the ones measured in this study, Sohal said.

However, implanting electrodes in a person's brain is an invasive procedure. So, the researchers recruited patients who were awaiting surgery and already had electrodes in their brains — in this case, 21 patients with epilepsy whose brain electrodes were primarily used to identify which regions of the brain were causing their seizures.

The researchers recorded the brain activity of these patients for seven to 10 days. During that same time period, the patients tracked their moods using mood diaries.

The study found that in 13 of the 21 patients, a bad mood was associated with an increase in communication between the amygdala (a brain region involved in processing emotions) and the hippocampus (involved in memory).

"The idea that memories of negative experiences and negative emotions are closely linked is an old idea in psychiatry, and is at the core of cognitive behavioral therapy," Sohal told Live Science. "Our findings might represent a biological basis for this relationship." (Cognitive behavioral therapy is a method that mental health experts use to treat conditions such as depression and anxiety, and involves changing the way a person thinks and behaves.)

A sad tune on the radio

Both the amygdala and the hippocampus have long been known to be involved in mood, depression and anxiety, Sohal said. However, he likened previous knowledge to knowing that a song is playing on a radio station, but not knowing which station to tune in to.

Now, we know the radio frequency — the activity pattern or communication of the neurons — and can therefore set our devices properly, Sohal said. In other words, these findings could be useful for developing new treatments that target this activity in the brain, Sohal said. Such treatments could, for example, aim to manage or decrease the excess communication between the amygdala and the hippocampus.

Still, it's unclear exactly how emotion and memory intermingle. Sohal speculated that, perhaps when a person is in a depressed mood, negative emotions in the amygdala trigger the recollection of sad memories, or vice versa.

It's also unclear if the bad mood causes increased chitchat in these regions, or if increased chitchat causes the bad mood. Even if it is the latter, Sohal said, and it turns out that yet another part of the brain is ultimately responsible for a person's bad mood, it's likely that the increased signaling still contributes to amping up the emotions. But if the brain activity is a result of a bad mood, researchers might be able to tap into this and measure it — like a pacemaker measures heart rhythms— to monitor the level of sadness in a severely depressed patient, for example.

Now, the team hopes to understand how this signal arises and if it affects other parts of the brain.