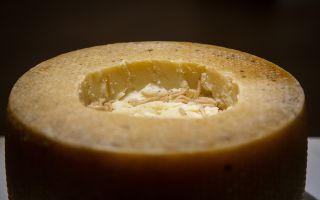 Is maggot-covered cheese disgusting or delicious?

That's not a trick question. To people from Sardinia, the cheese known as "casu marzu" — a sheep-milk pecorino seasoned liberally with fly poo and crawling with thousands of larvae — is highly prized for its unique flavors, and is eaten along with mouthfuls of the plump maggots that writhe on its surface.

However, if you're encountering casu marzu ("putrid cheese" in Sardinian) for the first time, you might find it a little hard to swallow. The same might be said for certain other regional delicacies, such as China's spicy rabbit heads, Kazakhstan's fermented mare's milk or Peru's roasted guinea pig. All of these are highly popular in their countries of origin but can inspire revulsion or dismay in diners who have never sampled them before.

If you're curious about which bizarre foods are the most likely to trigger queasiness in first-time tasters, wonder no longer. You can now find 80 of the world's most distinctive (and repulsive) edible oddities — including maggoty cheese — in one place: a new exhibit called the Disgusting Food Museum, in Mälmo, Sweden. [15 of the World's Most 'Disgusting' Foods (Photos)]

Unfamiliar scents and flavors abound in the museum. Some of the very special foods include frog smoothies from Peru, the foul-smelling durian fruit from Thailand, Finland's salty black licorice, a bull penis from China and slimy, fermented soybeans — a dish known as "nattō" that is popular for breakfast in Japan.

To be included in the exhibit, each dish had to qualify not only as potentially gag-inducing due to its smell, taste, appearance or texture, it also had to be thought of as delicious "somewhere in the world," curator and museum director Andreas Ahrens told Live Science.

With those criteria, the exhibit makes it clear that when you call a food "disgusting," that response reflects your cultural background as much as it does the signals from your senses, Ahrens said.

"There is a purpose for disgust," he said. "Disgust is a universal emotion that exists to warn us of potentially dangerous, poisonous foods." However, if a person grows up eating a certain food, they don't feel the aversion that may be experienced by someone who's a newcomer to the dish.

For example, a well-known Philippine dish called "balut" serves up partially developed duck embryos that are boiled alive inside the egg and then eaten whole. Ahrens told Live Science that he considers himself fairly adventurous when it comes to food — and when he tried balut, he just couldn't keep it down.

On the other hand, Ahrens' wife, who grew up in the Philippines, considers balut to be "absolutely normal," he said.

Another food in the museum that challenges the untrained palate is fermented shark from Iceland called "hákarl"; Ahrens described it as "death in a little can," saying it smells worse than anything in the world.

But there's something that tastes even worse than hákarl: "su gallu," another cheese from Sardinia. To make su gallu, a person would slaughter a baby goat that's just enjoyed its last meal of mother's milk. Then, they would remove the stomach and hang it up to dry, with the cheese fermenting from the milk that's still inside the kid's gut.

"It tastes like gasoline," Ahrens said. "If you eat too much of that, you have an aftertaste in your mouth for several days afterwards."

Of the 80 "disgusting" foods featured in the exhibit, most are represented by real food; many are "smellable"; and some are available for tasting, according to a museum statement. Perhaps after experiencing the sights and smells of these one-of-a-kind foods, museum visitors will find themselves a little more open-minded about dishes and cultures other than their own, Ahrens said.

Speaking of which, do you remember that maggot-infested cheese from Sardinia? If you try it, make sure to cover your eyes before you take a bite — not to hide the sight of the maggots you're about to gulp down, but to protect your eyeballs from the larvae, which can leap to heights of about 6 inches (15 centimeters), according to Ahrens.