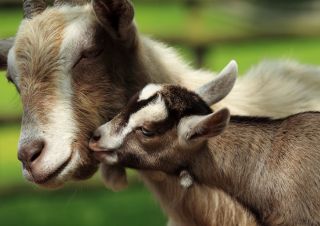 Don't underestimate the emotional lives of farm animals. According to new research, mama goats recall their babies' bleats at least a year after mother and kid are separated.

The study is one of the few to test whether the mother-child bond in animals lasts after the first period of dependence ends. It seems that goats, at least, remember their family ties long-term.

"They still react more to the calls of the kid from a previous year than to the calls of familiar kids born to other females" a year after weaning, said study researcher Elodie Briefer, a postdoctoral researcher at Queen Mary, University of London. "That means they have a long-term memory of the calls of their kids." [World's Cutest Baby Wild Animals]

Plenty of mammal mamas are known to recognize their babies during the post-birth and nursing periods, but it's tough to follow pairs of animals over time to see whether those bonds last. A few researchers have followed mother-baby pairs of some seal species, finding that both moms and pups remember each other's voices for years after weaning. Tamarin monkeys recognize their relatives even after four years of separation.

While goats can probably also use markings and scent to recognize each other, there is plenty of evidence that their voices are also important. Baby goats seem to pick up distinctive "accents" from their herdmates, research has found. And Briefer and her colleagues have found that mother goats know their babies' cries as early as one week after birth.

To find out if this voice recognition persists, the researchers recorded the calls of the 5-week-old kids of nine pygmy goat moms at a farm in Nottinghamshire in the U.K. Between seven and 13 months after these babies weaned and were separated from their mothers, the researchers played the bleats back to the moms in their pens, recording whether and how long the mother goats looked toward the sound or bleated back.

They found that mama goats responded more strongly to their own babies' cries than to the recorded cries of babies of other mothers living in the same pen. The responses weren't as strong as they were when the kids were dependent little 5-week-olds, but it seemed that mothers still remembered. This memory held even though the mothers had mated again and moved on to new offspring by the time of the follow-up experiment.

The cries of the current babies and the previous kids were different, the researchers found, so it's unlikely the moms were mistaking the recorded calls for the voices of their current young.

Goats are social creatures, Briefer told LiveScience. In the wild, they live in groups, segregating by sex in the day and coming together as a whole herd at night. Female goats probably stick close by moms their whole lives in the wild, so recognizing each other's voices is likely important, Briefer said. Knowing her son's call may also help prevent a mother goat from accidentally mating with him, she said.

Alternatively, the long-term recognition may just be a side effect of the strong mother-kid bond in the first days of nursing. It could be that these early memories are so strong that they just don't fade, Briefer said.

For farmers, the message is that goats are smart, Briefer said. They have long memories, and early separation of moms and kids may be very stressful. In the wild, baby goats wean at around 5 to 6 months of age, while at dairy farms, they're separated from their mothers at only about 2 months old. Lengthening their time together may be more humane, Briefer said.

More broadly, the results suggest that family ties run strong throughout the animal kingdom. Many mammals, from seals and monkeys to squirrels and elephants, have been shown to recognize family members after long separations, Briefer and her colleagues wrote Tuesday (June 19) in the journal Proceedings of the Royal Society B.

"It could be quite widespread," Briefer said.