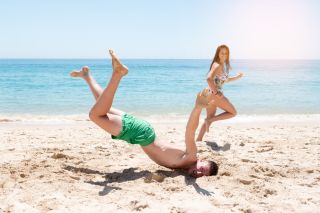 If you've ever reveled in the misfortune of another, you've experienced what the Germans call "schadenfreude." But which kind did you experience?

A new paper argues that there are three subtypes of schadenfreude, some of which might seem more defensible morally than others. People can experience glee in others' pain out of a genuine desire for justice, researchers wrote in an upcoming issue of the journal New Ideas in Psychology. Or people can be motivated by us-versus-them dynamics or even by petty personal jealousies.

What ties all these subtypes together, said lead study author Shensheng Wang, a graduate student in psychology at Emory University in Atlanta, is a common thread of dehumanization. [7 Thoughts That Are Bad for You]

"When we fail to perceive others as humans, when we dehumanize others, we cut off the link between us and the person who experiences a misfortune," Wang told Live Science.

Wang first became interested in the concept of schadenfreude a few years ago, when he was researching how children experience envy and competition. Schadenfreude had come up in earlier research by other scientists on envy, Wang said, but he found that researchers tended to define it in different ways. Some, for example, saw the emotion as justice-based, as people sometimes report feeling more schadenfreude for high achievers than for average Joes and Janes. Perhaps, these researchers argued, people want to cut others down to size when they think those individuals deserve comeuppance.

But feelings of schadenfreude don't emerge only when someone seemingly deserves it. People also feel the emotion about things like sports, Wang said, gaining pleasure when a rival team hits a losing streak.

Other studies had hinted that people might experience schadenfreude alongside envy or that they might be most prone to schadenfreude when the victim of misfortune was "the other" — someone not like them.

So far, there isn't a lot of research attempting to discern schadenfreude subtypes, Wang said, adding that he hopes the new paper will spur more studies.

There is evidence, however, that feelings of schadenfreude might start young — perhaps as early as 2 years of age. In one 2014 study, researchers set up experiments to elicit schadenfreude in 24-month-olds. In one condition, the scientists asked a mother to read a book to herself while her child and a preschool classmate played. After 2 minutes, the mom would "accidentally" spill water on the pages of her book. In the second condition, the mother would do the same thing but cuddle her child's friend on her lap as she read, making her own child jealous of the attention.

The researchers found that the jealous kids were more gleeful about the spilled water than the kids who hadn't been primed to experience jealousy. This was likely an early expression of schadenfreude, the researchers reported in the journal PLOS One.

People show individual differences in how they experience schadenfreude, as well, Wang said. The emotion is more common in people who are high in psychopathy (callous and unempathetic), Machiavellian traits (scheming), narcissism (self-obsessed) and sadism. But, Wang said, schadenfreude is pervasive among people in all settings, from political rivalries to sports.

"I think this emotion can shed light on some of the darker sides of our humanity," he said.