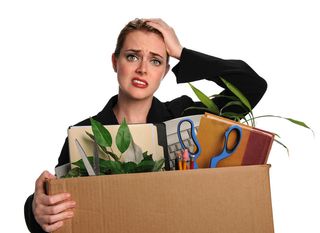 Do you take joy in seeing a colleague who "has it all" fail in some way?
(Image: © R. Gino Santa Maria | Shutterstock)

When the office slacker makes a mistake that could cost them a pay raise — do you truly feel bad, or do you have to work to hide your smile?

If you smiled, you've just experienced schadenfreude, a bit of enjoyment at the misfortunes of others. And now researchers know more about why we experience this seemingly odd emotion. Turns out, it can be a sure way to make you feel better about yourself. It's a self-affirming boost.

"If somebody enjoys the misfortune of others, then there's something in that misfortune that is good for the person," said study researcher Wilco W. van Dijk, adding that it could be due to thinking the other person deserves the misfortune, and so becoming less envious of them or feeling better about one's self.

In the study, van Dijk, of Leiden University in the Netherlands,and his colleagues had 70 undergraduate students (40 women and 30 men) read two interviews about a high-achieving student who was likely to land a great job. Then they read an interview with the student's supervisor revealing that the student had suffered a big setback in his/her studies. Next, they rated their level of agreement with five statements meant to gauge their schadenfreude, such as: "I enjoy[ed] what happened to Marleen/Mark"; "I couldn’t resist a little smile."

The researchers thought that perhaps the reason for this was that schadenfreude was self-affirming for these "threatened" individuals.

As a follow-up experiment, the researchers gave about half of the students a self-affirmation boost by shoring up their beliefs about what the students had indicated was a very important value to them, and then asked them to repeat the same interview-reading stint.

Participants with low self-esteem were again more likely to experience schadenfreude, and also more likely to feel threatened by the high-achieving student. However, those who had been self-affirmed were less likely than those who hadn't to reap pleasure when reading about the other student's academic slip.

"I think when you have low self-esteem, you will do almost anything to feel better, and when you're confronted with the misfortune of others," you'll feel schadenfreude, van Dijk told LiveScience. "In this study, if we give people something to affirm their self, then what we found is they have less schadenfreude — they don't need the misfortune of others to feel better anymore." [5 Ways to Boost Self-Compassion]

If you feel an evil sort of glee at the slip-ups of another, are you a bad person? Well, van Dijk says that just about all of us experience schadenfreude at some point in our lives.

"We know that it's very good to feel empathy and sympathy for people, so if you feel schadenfreude without any sympathy or compassion for that other person," that would not be good, van Dijk said. "Our society thrives on compassion and empathy."

While some of us get a kick out of the small blunders of a colleague, say, others experience schadenfreude due to another's grave misfortunes, as van Dijkhas found in research yet to be published.

The current study is detailed in the December 2012 issue of the journal Emotion.