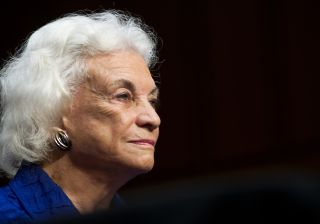 Former U.S. Supreme Court Justice Sandra Day O'Connor — the first woman appointed to the U.S. high court — announced that she had been diagnosed with dementia.

"Some time ago, doctors diagnosed me with the beginning stages of dementia, probably Alzheimer's disease," O'Conner wrote in a public letter dated today (Oct. 23).

Alzheimer's disease is a form of dementia, but how do doctors distinguish between the notorious disease and other forms of dementia? [6 Big Mysteries of Alzheimer's Disease]

Dementia is a general term that encompasses any condition that's linked to the loss of cognitive functioning — such as thinking, remembering and reasoning — and that affects a person's daily functioning, according to the National Institute on Aging.

Everyone loses brain cells or neurons as they age. But a person with dementia loses far more neurons and connections to other neurons that allow important signals to travel through the brain.In its various stages, dementia can affect a person's memory, language, visual perception, problem-solving skills, self-management and ability to pay attention.

"Alzheimer's disease is the most common form of dementia among older people," said Dr. Rawan Tarawneh, a neurologist at The Ohio State University Wexner Medical Center, who is not involved with O'Connor's case.

Typically, the first symptoms of the disease are difficulties with short-term memory, such as having trouble remembering recent conversations, events or people's names, Tarawneh told Live Science. Other early symptoms can include having trouble finding words during conversations or reduced problem-solving abilities, such as in managing finances. Depression and loss of interest in some activities are also common, she said.

As Alzheimer's disease progresses, people can have more difficulty communicating, get lost in places they know well and have poor judgement in social situations, Tarawneh said. People can also experience behavioral changes — such as agitation, irritability, episodes of wandering, hallucinations and delusions — as the disease progresses, she said. "In the most severe cases, a person with Alzheimer's disease may need help with simple activities, such as walking, feeding or dressing themselves," she said.

Buta lot of these symptoms are also common in other types of dementia. So, what makes different dementias, well, different? It comes down to what's happening in the brain.

Alzheimer's or another form of dementia?

A hallmark of Alzheimer's disease that distinguishes it from other forms of dementia is an increase in a type of protein called amyloid in the brain. One of the first biological changes to occur in the brain of a person with Alzheimer's is the buildup of clumps of these proteins, called amyloid plaques, between neurons, which hinders their function. Another characteristic of Alzheimer's disease is a buildup of a different protein, called tau. The buildup of both types of protein leads to neurodegeneration, or brain-cell death.

But unlike amyloid plaques, tau buildup and neurodegeneration aren't unique to Alzheimer's disease; they can also occur in other forms of dementia, said Rebecca Edelmayer, the director of scientific engagement at the Alzheimer's Association. This is why "it can be difficult, sometimes, to determine [what form of dementia a person has] based on cognitive testing and symptoms alone," she said.

Indeed, dementia diagnoses remain a bit shaky. There are "a number of people who get told they have Alzheimer's but they don't actually have it," Edelmayer told Live Science.

To make matters more confusing, many people don't have "pure" Alzheimer's disease or a "pure" other form of dementia, but rather, a mixture of different dementias, Edelmayer said. These can include vascular dementia, which affects the blood vessels in the brain, and Lewy body dementia, which is characterized by the buildup of yet another type of protein in the brain.

"What the scientific field is trying to do now is to create other ways to differentially diagnose individuals' dementia using biomarkers," Edelmayer said. Biomarkers are biological changes in the brain, such as an increase in amyloid plaques, that can determine the presence of a disease. Some of these biomarkers appear in people as early as 10 to 20 years before the person first shows symptoms of dementia, Edelmayer added.

Making the right diagnosis is important, because "all of these different types of dementia are characterized by different biological changes in the brain," Edelmayer said. So, if doctors know exactly what's going on in the brain, they can tailor more-specific treatments to the disease.