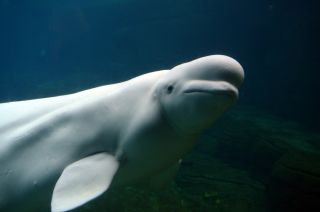 Whales have it hard. For a century, they were hunted to a mere fraction of their preindustrial populations, and they now face constant threats from pollution, climate change and ongoing human meddling in the planet's waterways. It's a lot for a cetacean to worry about, and now, according to recent research, whales can add "cat poop" to their list of concerns.

In the new study, published online Sept. 27 in the journal Diseases of Aquatic Organisms, a team of marine researchers from Canada tested the brain and heart tissues of 34 beluga whales. The animals died in Quebec, Canada's St. Lawrence Estuary between 2009 and 2012. The researchers were looking for parasites — in particular, Toxoplasma gondii. This single-celled parasite is commonly found in cats and is notoriously good at spreading to other animals, usually through feces. The team found that 15 of the whales (about 44 percent of the samples) tested positive for T. gondii.

Still, these findings don't prove that the whales died from this parasite, study co-author Stéphane Lair, a professor of veterinary medicine at the Université de Montréal, told the CBC. Rather, "it means [that the parasite was present] either in their heart or their brain." [7 Strange Facts About the 'Mind-Control' Parasite Toxoplasma Gondii]

T. gondii causes a disease called toxoplasmosis. The parasite is spread primarily via the feces of wild and domestic cats, who get the parasite by eating infected rodents. T. gondii is notoriously easy to transmit between most warm-blooded creatures.

Oddly enough, marine animals have lived in contact with the parasite for thousands of years, Lair said, but the infection rates have risen significantly over the last few centuries, as has the popularity of domestic cats. If you know a cat, T. gondii may even be in you. According to the Centers for Disease Control and Prevention, 20 percent of the U.S. population may be infected with T. gondii, while other studies have estimated that up to 80 percent of the world's human population could carry the parasite.

In human adults, T. gondii infection usually has pretty mild effects. Toxoplasmosis could result in a few weeks of flu-like symptoms in people, although some studies have tentatively linked the disease to neurological conditions like schizophrenia, bipolar disorder and, uh, really wanting to start a business.

The precise health effects of toxoplasma on various marine mammals are still under study. This parasite is believed to cause a number of neurological and behavioral disorders in marine life, and it has been identified as a cause of death in sea otters, monk seals, dolphins and whales. Mammals living near freshwater outflows into the ocean (like the St. Lawrence Estuary) are thought to face a greater risk of infection, because, as the saying goes, cat poop flows downstream.

Want to help save the whales from this looming poop crisis? Here's how you can help: If you have a cat, don't flush its litter down the toilet. Often, that's a direct channel for T. gondii parasites to slip into the sea.

"The parasite is quite resistant," Lair said. "It would survive all the different [sewage] treatments and end up in the estuary."