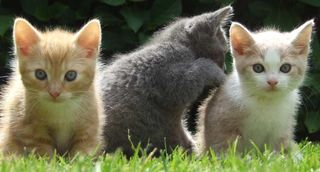 Pentagon-backed scientists aim to create a human-like machine, at some point. But they are starting out with the goal of crafting artificial intelligence on the level of a cat's brain. Still there are vast challenges.

If they get far enough, however, one scientist says that they could theoretically achieve feline intelligence with a mouse-sized artificial brain and an even smaller body.

That's because bigger brains by themselves don't necessarily mean greater intelligence or more complex behavior — for instance, cats show more smarts than cows despite having a feline brain 10 times smaller than a bovine brain. What might really matter is that humans and some other species have bigger brains for their body size.

"If they're trying to get cat-level behavior, there's no necessary reason to go for a cat-level brain unless they need a cat-level body of some kind," said Mark Changizi, a neurobiologist at Rensselaer Polytechnic Institute in Troy, N.Y.

Changizi discussed his idea with an IBM researcher working on the SyNAPSE project run by the U.S. Defense Advanced Research Projects Agency (DARPA). The Pentagon agency has recruited the help of IBM, HP and leading research institutes to try to develop an artificial brain that is approximately cat-like in terms of size, number of brain cells and synapses, anatomical structure and even behavioral complexity.

Such a massive and complicated undertaking could easily falter short of the goal, even if various researchers have begun working on electronic devices that can mimic cat brain cells. Changizi compared the task at hand with trying to reverse-engineer the biological design of the brain and trace its evolution backwards over hundreds or thousands of years.

A mystery of bigger brains

But reservations aside, Changizi does see the small ray of hope for the DARPA project regarding the brain size required to achieve feline intelligence. His observation goes to the heart of what he calls the "big embarrassment of neurobiology," or the scientific uncertainty about why brain sizes scale up so much in bigger bodies.

"Animals which are a thousand times bigger are just as dumb as the ones that are small," Changizi told LiveScience.

Bigger brains do allow for quantitative rather than qualitative improvements, such as finer resolution, higher sensitivity or greater precision in certain senses. They pack in more neurons, and add even more synapses (connections with other neurons) per neuron to keep all of the brain cells interconnected so that they can send signals to one another.

Bigger brains also tend to have more compartments, where well-connected regions of the brain are located physically close together as a way of minimizing wire costs and neural delay between neurons. But greater intelligence does not seem to depend on having more compartments, more complex wiring or more neurons.

To better appreciate the puzzlement among neuroscientists, consider that a large mammal's brain is about a million times bigger than an insect's brain. Yet a survey of behavioral studies showed that mammals only have about two or three times as many behavioral functions compared with insects. Complex social behaviors among ants, bees and other insects also suggest their tiny brains can still pack a lot of behavioral complexity.

Artificial neural networks have even demonstrated that a relatively few neurons can carry out fairly complex cognitive tasks. Insects would likely have evolved over millions of generations to maximize their tiny brains' computing power — something that human scientists have only recently begun trying to recreate.

Boost the brain, shrink the body

Even if neuroscientists don't currently understand the connection with brain-body size ratio, Changizi says that solving the mystery might make the DARPA effort a bit easier. Rather than painstakingly recreating an artificial cat brain, researchers could make smaller artificial brains with even smaller bodies that are still capable of carrying out complex behaviors or tasks.

Changizi speculated that smarter brains might depend upon the diversity of neuron types, or a more efficient division of labor within the mind. But he readily acknowledged that most of the brain remains a mysterious "black box" for scientists.

"Lay people tend to think that we neuroscientists know what we're doing and that we're on the cusp of understanding it all, but that's so far from the truth," Changizi said.