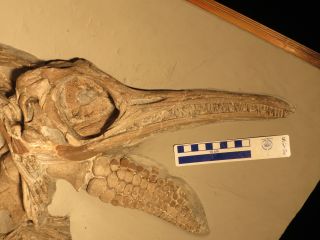 The fossilized skull of Ichthyosaurus larkini, housed at the University of Bristol in England, may show evidence of a salt gland duct, which would have helped the fearsome reptile remove excess salt from its system. Look for the circular bump at the bottom of the long crevice (the nares) located right of the eye and above the teeth.
(Image: © Dean Lomax)

ALBUQUERQUE, N.M. — Ancient sea monsters inadvertently swallowed mouthfuls of seawater whenever they gulped down prey, but they had a stealthy trick to get rid of all that salt.

Their secret? Salt-secreting glands, which removed any salt surpluses, Judy Massare, a professor emerita in the Earth Sciences Department at The College at Brockport, State University of New York, said here at a presentation today (Oct. 17) at the 78th annual meeting of the Society of Vertebrate Paleontology. Massare helped locate these glands in ichthyosaurs — fearsome dolphin-like reptiles that lived during the dinosaur age.

Massare and her colleagues spotted evidence for the ichthyosaur's salt-removing glands on either side of the prehistoric creature's skull, just behind the external naris, the opening for breathing, she said. "When we saw odd structures in bones that border the external naris, we suspected that they were defining the position of a salt gland duct," Massare told Live Science. [Image Gallery: Ancient Monsters of the Sea]

Ichthyosaurs are hardly the only marine reptile that have these salt glands. "Reptilian kidneys are not advanced enough to remove all of the excess salt, which is how whales deal with the problem," Massare said. "So, they have evolved salt glands to remove salt from their bodies. All [living] marine reptiles, [such as] turtles, sea snakes and crocodiles, have salt glands," she added, including sharks, which house salt glands in their rectums.

However, scientists weren't sure if some ancient reptiles, such as ichthyosaurs, also sported salt glands. Corroborating evidence suggested they did: fossilized hooklets from squid-like animals are often found in the ribs of ichthyosaurs, so it follows that these predators likely swallowed lots of seawater when guzzling these invertebrates, Massare said.

"That means a lot of salt was taken in and needed to be removed," Massare said.

It wasn't until a 2012 study in the journal Paludicolathat Bill Wahl, a paleontologist at the Wyoming Dinosaur Center, identified evidence for the first salt glands on an ichthyosaur (Ophthalmosaurus natans) from Wyoming dating to the Jurassic period, which lasted from about 199 million to 145 million years ago. (It's not odd to find fossilized sea creatures in the middle of America. This ichthyosaur once swam in a giant seaway that covered much of the U.S. Midwest and South from about 100 million to about 75 million years ago.)

Now, Massare, who is leading the new project, Wahl and their colleague Dean Lomax, a paleontologist at the University of Manchester in England, have identified even more salt glands in other fossilized species, such as the Jurassic ichthyosaurs Ichthyosauruslarkiniand Ichthyosaurus somersetensis.

The research has yet to be published in a peer-review journal.

Granted, the research team hasn't found the actual salt glands, which were made of soft tissue and didn't fossilize. Rather, they found "previously unexplained projections on bones … indicating the position of a duct from a nasal salt gland," Massare said.

The team has made a good case that that these bony structures might be evidence of salt glands, especially since the structures appear fairly consistent across different ichthyosaur species, said Takuya Konishi, an assistant professor-educator in the Department of Biological Sciences at the University of Cincinnati, who was not involved with the research.

However, the case would be strengthened if researchers were to find these structures in earlier, Triassic period ichthyosaurs, too, when these reptiles were first preserved in the fossil record. (Massare, for her part, said she has yet to extensively look for evidence of salt glands in Triassic specimens.)

"The salt gland must have been evolved at the very beginning, at the time that they became marine," Konishi said. "I would be very excited to see a follow-up study to further augment [this idea] by finding more osteological marks, even in these Triassic forms."