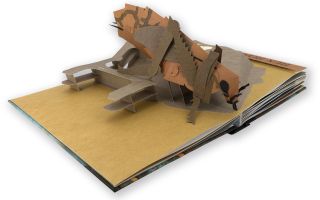 The enormous "rex roach" — a cockroach roughly the size of a puppy — is one of the unsettling animals that have evolved to thrive in toxic ecosystems, in "Beyond the Sixth Extinction."
(Image: © Candlewick Press)

In a toxic urban landscape of the future, what strange (and still oddly familiar) animals might have evolved to survive there?

A new book, "Beyond the Sixth Extinction: A Post-Apocalyptic Pop-Up" (Candlewick Press) by Shawn Sheehy, artfully imagines the grotesque creatures that could live in a possible future — one reshaped by disasters so destructive that 75 to 80 percent of life on Earth went extinct.

How odd would this world's inhabitants be? Imagine a giant, flightless pigeon that carries its young in pouches under its wings, a freshwater turtle with a shell fortified by heavy metals, and a cockroach as big as your head. [Real or Fake? 8 Bizarre Hybrid Animals]

Set in the year 4847, "Beyond the Sixth Extinction" is a bestiary representing inhabitants of nightmarish ecosystems of the future, and Sheehy uses intricately crafted 3D paper pop-ups to introduce a host of highly unusual animals. At first glance, they somewhat resemble wildlife alive today. However, the newly imagined species sport highly unusual adaptations that help them survive in harsh and extreme environments, Sheehy told Live Science.

Over the past 500 million years, Earth has undergone five mass extinctions that eradicated millions of species. Each event is thought to have wiped out between 50 and 95 percent of all life on the planet, and experts have warned for years that we are on the verge of a sixth mass extinction — facing the loss of at least 75 percent of species alive today in a relatively short period of geologic time.

But unlike earlier extinction events caused by massive volcanic eruptions or collisions with an enormous asteroid or comet, the cause of the next mass extinction will be destructive human activity.

In "Beyond the Sixth Extinction," eight imagined species of the future are the end product of thousands of years of evolution after a human-driven global-extinction event. Over millennia, they adapted to withstand high levels of harmful radiation, and they are capable of absorbing nutrients from whatever is available, even objects that their ancestors would have found inedible, Sheehy explained.

And the creatures are bizarre. Any person who lives in a city is likely very familiar with cockroaches. But the book's "rex roach" is about the size of a puppy, bigger than any insect that ever lived. Roaches are known to be resistant to the negative effects of harmful radiation, and over time the rex roach has evolved even greater protection, according to the book. An insect's body size is typically limited by how much oxygen it can circulate through its exoskeleton. But the rex roach has a stretchy shell that allows it to expand and contract its body like a bellows, taking in more oxygen and enabling them to grow bigger than insects today.

Another oddball creature in the book, the "clam fungus" clusters atop landfills and breathes methane. Meanwhile, a crustacean called the "peteybug" can roll itself up like a woodlouse and feeds on discarded plastic. This post-apocalyptic world would also be inhabited by the "mudmop," a bottom-dwelling fish with a face full of tentacles, and the "rotrap," a ratlike animal that lives its adult life permanently attached to walls in flooded nuclear reaction chambers.

Though the world where these fanciful species reside seems bleak, the ability of certain forms of life to evolve and survive even under grim conditions may offer readers a ray of hope, Sheehy said.

"Ultimately, this is a resilient system. It's demonstrated resilience for billions of years. So even if we hit this 75 to 80 percent species loss, once the species that's causing all of the issues gets out of the way, it's going to bounce back. It's going to recover and resume diversity and richness," he said.

"Beyond The Sixth Extinction" was published Oct. 9 and is available at Amazon, Barnes and Noble and other booksellers.