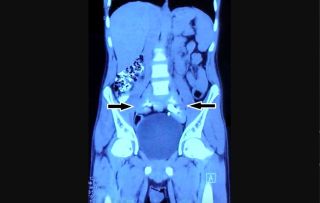 The man's "pancake kidney" is visible between the two arrows in this CT scan, sitting just above the bladder (the darker blue circular structure). Normally, the two separate kidneys would sit higher up in the body, closer to the top two vertebra (the white squares) that appear in the scan, and farther out to either side of the body.
(Image: © BMJ Case Reports 2018)

When an 18-year-old man in India went to the emergency room for intestinal problems, doctors ordered a computed tomography (CT) scan to get a clear look at the issue. But the scan revealed something completely unrelated to the man's gut problems: He had a rarely encountered condition called "pancake kidney," according to a recent report of his case.

The "extraordinarily rare" condition is almost exactly what it sounds like, said Dr. Steven Chang, an assistant professor of surgery in the division of urology at Brigham and Women's Hospital in Boston. Chang treats patients who have kidney cancer but was not involved in the man's case.

A "pancake kidney" occurs when the top and bottom of the kidneys fuse together, so instead of two separate, kidney-bean-shaped organs, the person ends up with one big, fused kidney, Chang told Live Science. [27 Oddest Medical Cases]

Of course, pancakes aren't the only flat, disc-like objects: The unconventional, fused organ may also be referred to as a "disc, doughnut, cake or a shield kidney," according to the case report, which was published online Oct. 2 in the journal BMJ Case Reports.

A pancake kidney forms during embryological development, Chang said. Normally, when the kidneys form, these two developing structures ascend to a location in the body that's closer to the mid-spine, with one kidney migrating to either side of the spine, he said.

But in a person who develops a pancake kidney, something goes awry during this ascent. The tops and bottoms of the two developing kidneys fuse, and a slight misdirection in the path of the kidney alters its body position, Chang said.

A pancake kidney isn't the only variety of kidney abnormality, however. A more common, but still rare, condition occurs when the two developing kidneys fuse together at the bottom — but not at the tops — creating a U-shape. This is known as a "horseshoe kidney," Chang said.

People can live their whole lives with a pancake kidney and never know they have it, Chang said.

Indeed, in the man's case, doctors weren't looking for a pancake kidney, and it wasn't causing any problems. (The reason that the man went to the hospital, an intestinal obstruction, was successfully treated, and wasn't related to his oddly shaped kidney.)

But there's no need to treat a pancake kidney by surgically separating the mass into two kidneys, especially if a person has normal kidney function like this young man did, Chang said. This type of surgery would be difficult, and the risks would outweigh the benefits, he noted.