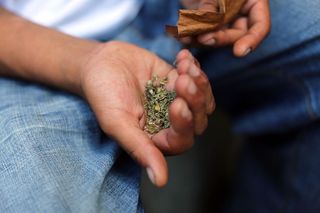 In March of this year, strange reports began to emerge: Synthetic pot was making people's eyes bleed. And what started out as a handful of people who were affected has grown to more than 250 people across the U.S., with cases continuing to pop up.

Soon after the outbreak began, the culprit was identified as synthetic marijuana contaminated with brodifacoum. Used as a rat poison, brodifacoum can cause severe thinning of the blood, leading to bleeding in multiple parts of the body.

The outbreak marks the first time that the drug has been contaminated with this poison, which made diagnosing and treatment of affected patients particularly challenging, according to a new report of the cases, published today (Sept. 26) in The New England Journal of Medicine.

"People came in bleeding, [which] for young people without trauma, is pretty unusual," said lead author Dr. Amar Kelkar, a clinical fellow in hematology and oncology at the University of Florida College of Medicine, who treated some of the initial patients in the outbreak in Illinois. [27 Oddest Medical Cases]

Although the cases are highly unusual, doctors are now learning how to better identify and treat people who used the tainted drugs. However, treatments have proved challenging, with patients requiring months-long therapy and massive doses of the antidote, vitamin K, the report said.

Kelkar was a medical resident on call at the Saint Francis Medical Center in Peoria, Illinois, in late March when an unusual case showed up in the emergency room. A relatively young man had blood in his urine, and pain in his sides. Imaging scans showed strange findings, including increased blood flow to the man's kidneys in a pattern that is not typically seen, Kelkar said.

"Things just didn't seem to add up as to why they were bleeding," Kelkar told Live Science.

But a standard lab test revealed an important clue: A blood test that measures the time it takes for blood to clot was off the charts. "[The] marker was maxed out on the scale," Kelkar said.

This test uses a value called the "international normalized ratio," or INR. Healthy people typically have an INR of 1.1 or below; and people on the blood thinner warfarin can have an INR of 2 to 3, according to the Mayo Clinic. But this patient's INR was 20, the maximum value the test could show.

The patient turned out to be one of the first cases tied to the drug outbreak. A collaborative effort from the Illinois Poison Center, the Illinois Department of Public Health and doctors throughout the area helped link the outbreak to synthetic marijuana contaminated with rat poison.

The new report details findings from 34 patients who were treated at Saint Francis Medical Center. Kelkar said the report is meant to help doctors recognize and treat patients who may be affected by the rat-poison-laced drugs.

"We realized that this is not something that [doctors] see very often," Kelkar said. "We didn't want people to continually have to reinvent the wheel" when treating these patients, he said.

All of the patients had recently used synthetic marijuana, sometimes called K2 or spice, with many patients reporting use the day before they went to the hospital.

The most common symptom was blood in the urine. But many patients also had bleeding from their gums, mouth or nose, blood in their stool, or symptoms of vomiting or coughing up blood. When patients were tested for several different blood thinners, all were positive for brodifacoum.

Brodifacoum belongs to a class of drugs known as "superwarfarins" because they are much more potent than warfarin. The drugs block the activity of vitamin K, which is needed in the body for the production of important proteins involved in blood clotting.

To reverse the vitamin K-blocking effects of warfarin or brodifacoum, people need to take vitamin K supplements. But the amount of vitamin K required to treat brodifacoum poisoning is much higher than that needed during warfarin therapy — for a typical patient on warfarin, doctors might prescribe a single dose of 5 to 10 milligrams of vitamin K, but patients who used the tainted drugs needed as much as 150 mg per day. What's more, patients with brodifacoum poisoning often needed treatment for many months.

"The sheer volume of vitamin K needed, and the length of time needed to…get [the brodifacoum] fully out of your system," was surprising, Kelkar said.

Another obstacle for doctors was the high cost of vitamin K — 15 mg of the drug can cost about $170 out of pocket, according to an editorial published alongside the report. All told, the doses required for patients in the outbreak could cost around $24,000 to $34,000 per month.

"Getting these really, really high doses we need for these patients, at least initially, proved to be exorbitantly expensive," Kelkar said.

To help address the outbreak and the cost of treatment, the hospital created a multidisciplinary team that managed the patients, worked with local pharmacies and insurance companies to address drug pricing, and arranged for deliveries of vitamin K to the area. Eventually, the company that makes the prescription vitamin K supplement ended up donating 800,000 tablets for the outbreak.

The authors hope that law enforcement continues to investigate the cause of the contamination "just to help bring this to a close" and bring the people who did this to justice, Kelkar said.