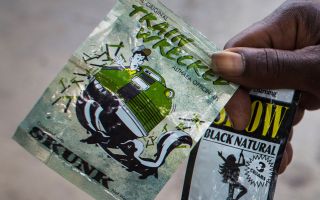 Health officials in Illinois are warning people that synthetic marijuana can cause bleeding from the ears and eyes, according to news reports.

According to a March 27 statement from the Illinois Department of Public Health, six people experienced severe bleeding; all six had reported using synthetic pot.

Yesterday (March 29), the Chicago Tribune reported that the number had risen to 22, a figure that included cases dating back to March 7.

Synthetic marijuana, also called K2 or spice, isn't a substitute for marijuana, Live Science reported in 2016. Instead, the substances get this name because they're loosely related, chemically, to tetrahydrocannabinol (THC), the psychoactive ingredient in pot. These THC-like chemicals are then sprayed onto plant products and sold as synthetic marijuana. But the chemicals used can be different every time the K2 is made, and therefore, symptoms are unpredictable.

Even so, severe bleeding is not a known side effect of the drugs, Dr. Melissa Millewich, an emergency room physician at Advocate Good Samaritan Hospital in Illinois, told the Tribune. "This bleeding is not expected, at least in such a significant population so quickly," she said.

Millewich added that a change in the formula used in the drug could be behind the bleeding, but because health officials don't know the exact makeup of the products, exactly what's causing the bleeding is unclear.

It's possible that there's an anticoagulant, or blood thinner, in this batch of drugs and that it's causing the bleeding, Dr. Jerrold Leikin, director of toxicology at NorthShore University HealthSystem, told NBC Chicago.