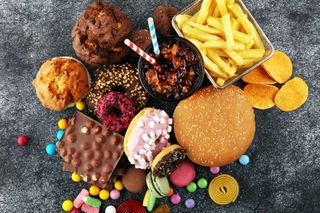 Junk-food lovers who try to cut back on fries or chocolate may experience symptoms similar to drug withdrawal, a new study suggests.

Researchers found that people attempting to cut down on eating highly processed foods experience some of the same physical and psychological symptoms — such as mood swings, cravings, anxiety, headaches and poor sleep — as those quitting smoking cigarettes or using marijuana, according to the study, which was published online Sept. 15 in the journal Appetite.

The new study offers the first evidence that these withdrawal-like symptoms can occur when people cut down on highly processed foods, said lead study author Erica Schulte, a doctoral candidate in psychology at the University of Michigan. [11 Ways Processed Food Is Different from Real Food]

Based on the participants' self-reported symptoms, withdrawal symptoms were most intense between the second and fifth days after attempting to reduce junk-food consumption, which parallels the time span people live through during drug withdrawal, Schulte told Live Science.

The idea that food may be addictive after "heavy" use by some individuals is a controversial subject, Schulte said. Although prior research studies in animals and humans have shown some biological and behavioral similarities between substance-use disorders and addictive-like consumption of highly processed foods, no studies have looked at whether reducing junk food can trigger withdrawal symptoms in people, she noted.

In the study, the researchers developed a new tool modeled after the withdrawal scales that are used to assess symptoms that occur after people quit smoking or stop using marijuana. This modified questionnaire was given to more than 200 adults who had dieted during the past year by attempting to cut down on junk food.

The results showed that the symptoms people experience during withdrawal from tobacco or marijuana may also be relevant to cutting out highly processed foods from the diet, Schulte said. Withdrawal is a key feature of addiction and showing that it may also occur when reducing junk-food consumption provides more support for the hypothesis that highly processed foods may be addictive, she added.

Indeed, the new "study fills an important missing piece in [the] research on food addiction," said Nicole Avena, an assistant professor of neuroscience at the Icahn School of Medicine at Mount Sinai in New York City, who was not involved in the new study. Up until now, there hasn't been a reliable way to measure withdrawal symptoms tied to food in humans, and the new tool used in the study provides a valid measure that can be useful in understanding more about the addictive nature of highly processed foods, said Avena, who's done research on food addiction.

More and more research has suggested that the foods we eat, which are often highly processed and contain excessive amounts of sugar, could cause changes in the brain that are similar to those seen with addictions to drugs, like alcohol and tobacco, Avena told Live Science. The new study adds to the growing literature that suggests that highly processed foods can produce addiction-like responses in humans.

Practically speaking, raising awareness that people may experience irritability or headaches when cutting down on junk food can help individuals prepare coping strategies in advance, Schulte noted. The findings may also shed light on the barriers people face when changing eating habits — barriers that may play a role in people dropping out of treatments, she said. [10 Ways to Promote Kids' Healthy Eating Habits]

A limitation of the study is that it asked participants to recall their withdrawal symptoms, but a next step would be to measure these effects in real time, while people were actually reducing their junk-food consumption, Schulte said.

In addition, researchers did not measure the intensity of withdrawal symptoms compared to drug withdrawal symptoms, nor did they consider what methods — such as going cold turkey or gradually eliminating foods — people used to change their eating habits.