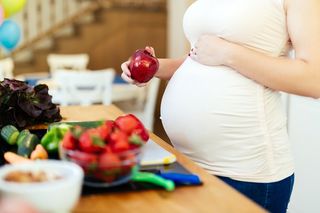 Gaining too much weight during pregnancy is tied to an increased risk of complications for both mother and baby. However, some doctors are reluctant to recommend that pregnant women restrict their weight gain, in part due a lack of tools to help mothers do this safely.

But now, a new study finds that with the help of nutritional counseling and a smartphone app, pregnant women who are overweight or obese can safely restrict their weight gain in pregnancy.

In the study, women who were overweight or obese were assigned to follow a specific diet during pregnancy. The women received guidance from a nutritionist and used a smartphone app to log meals. At the end of the study period, these women had gained less weight than pregnant women in a control group who didn't follow the diet. The women on the diet gained 4.5 lbs. (2 kilograms) less than the other women. What's more, babies born to mothers in the diet group were not at increased risk of low birth rate or other problems. [Blossoming Body: 8 Odd Changes That Happen During Pregnancy]

It's "very reassuring" that babies born to mothers who restricted their weight gain during pregnancy were not at increased risk for harm, said Dr. Saima Aftab, the medical director of the Fetal Care Center at Nicklaus Children's Hospital in Miami, who was not involved in the study. Aftab added that doctors currently don't have specific tools to help pregnant women restrict weight gain, and so the type of program in the study "may be a solution in the future."

However, Aftab stressed that larger studies are needed to examine whether this approach ultimately leads to heathier pregnancies and healthier babies, because the current study wasn't designed to answer those questions.

The study, from researchers at Northwestern University Feinberg School of Medicine in Chicago, was published Sept. 24 in the American Journal of Preventive Medicine.

Women who are overweight or obese in pregnancy have a greater risk of pregnancy complications, including gestational diabetes and pregnancy-related high blood pressure, according to the Mayo Clinic. What's more, women who are overweight and obese are also more likely than women at a healthy weight to gain too much weight during pregnancy, which puts them at risk of having larger babies. That factor can lead to problems with delivery as well as low blood sugar levels in the newborn. Babies that are born larger than average may also be at higher risk for obesity in childhood, the Mayo Clinic says.

Still, nearly half of U.S. women gain too much weight in pregnancy, according to the Centers for Disease Control and Prevention.

In the new study, the researchers analyzed information from 281 women who were overweight or obese at the start of their pregnancies. The women were divided into two groups: an intervention group and a usual-care group.

The intervention group met with a nutritionist, who counseled the women on how to follow the DASH diet, which is high in fruits, vegetables, whole grains, nuts, fish and lean protein and low in salt, sugar and saturated fat. The goal of the diet was not to help the women lose weight but to restrict their weight gain in pregnancy to meet the NAM recommendations. Women in this group also used a smartphone app to record what they ate, and a nutritionist reviewed these logs to provide feedback. In addition, the women were given a pedometer and told to aim for at least 30 minutes of physical activity, such as walking, per day.

Women in the usual-care group were given general advice on nutrition and physical activity in pregnancy but did not receive coaching or use the smartphone app.

At 35 weeks of pregnancy, women in the intervention group had gained 22 lbs. (10 kg), on average, compared with 26 lbs. (12 kg) in the usual-care group. In addition, about 31 percent of those in the intervention group stayed within the NAM recommendations for weight gain in pregnancy, compared with just 15 percent in the usual-care group.

Babies born to mothers in the two groups had similar birth weights, on average, and were not at increased risk of neonatal problems, the study said. [The Best Ways to Lose Weight After Pregnancy]

The current study looked at whether the intervention worked and was safe, but the research wasn't designed to look at whether women who followed the diet were at lower risk of pregnancy complications or had healthier babies, Aftab told Live Science. That's why larger studies are still needed before a program like this could be recommended by doctors.

In addition, unexpectedly, obese mothers in the intervention group were more likely to need cesarean sections than women in the usual-care group. This finding could have been due to chance, but it's another reason to take caution regarding the results and to conduct further studies, Aftab said.

More studies are also needed to determine if the children born to mothers who restricted their weight gain in pregnancy have a lower risk of obesity themselves. The researchers said they plan to follow the children until they are at least 3 to 5 years old to help answer this question.