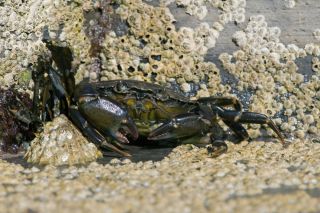 Green shore crabs (Carcinus maenas) are not new to Maine's waters, but a mutant version of the crabs has been invading for the past few years. And they're mean.
(Image: © Shutterstock)

An aggressive breed of green crab is invading Maine's waters.

The crabs (Carcinus maenas) threaten blue mussels, soft-shell clams and the eelgrass beds off the state's rocky coast. The crustaceans are also just plain nasty: Researchers who work with the crabs say that instead of hiding from threats, the critters rush forward, pincers waving.

"Anytime I went down to grab one, they went to grab me instead," Louis Logan, a graduate student at the University of New England, told the Associated Press.

The crabs, which measure about 5 inches (13 centimeters) long, belong to the same species that has long lived in Maine's waters. But in the past few years, a genetically distinct population of this species has traveled south from Nova Scotia, Canada, according to research led by Markus Frederich, a professor of marine sciences at the University of New England. These non-native crabs chow down on marine animals that are important for Maine's economy, including mussels and clams, and the invaders shred native eelgrass habitat as they hunt, according to the state's Department of Marine Resources.

Green crabs probably arrived in North America in the 1800s in the ballast water of ships from Europe. In the past decade, Maine's green crab population has exploded, a cycle probably linked to rising ocean temperatures, according to the marine resources department. A similar pattern occurred during a warm period in the 1950s. [In Images: Amazing World of Deep Sea Yeti Crabs]

The Department of Marine Resources is attempting to halt the damage by encouraging municipalities in trapping and removal of the crabs and by working with the U.S. Army Corps of Engineers to install crab fences that would keep the invasive animals out of particularly valuable shellfish beds.

Meanwhile, Frederich and his colleagues are working to understand why the new arrivals from Nova Scotia are so much more aggressive than the green crabs that had previously made Maine their home. The scientists are researching how water temperature and salinity might alter the crabs' behavior, according to the University of New England, and even putting crabs on treadmills to test their endurance and metabolism.