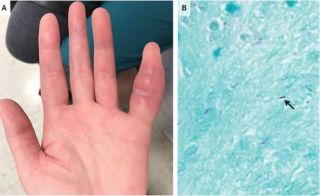 A woman's swollen finger was a rare sign of tuberculosis infection. Above, an image of the woman's finger (panel A), and a microscopic view of the infection (panel B). An arrow points to the tuberculosis bacteria.
(Image: © The New England Journal of Medicine ©2018.)

A swollen finger is often the symptom of a simple sprain, but for one woman in California, a puffy pinkie was a rare sign of tuberculosis, according to a new report of the case.

The 42-year-old woman went to the doctor after a week of swelling and pain in her pinkie finger. However, she hadn't injured her finger at all, according to the report from doctors at the University of California, San Francisco.

An X-ray and CT scan showed swelling of the soft tissue in her finger, but no problems with her bones. (Soft tissues include muscles, tendons and skin.) [27 Oddest Medical Cases]

When doctors performed a biopsy of the woman's skin tissue, they found Mycobacterium tuberculosis bacteria, the bacteria that cause tuberculosis.

According to the report, the woman had lupus and was taking medications to suppress her immune system, which made her more susceptible to infectious diseases — including tuberculosis.

Tuberculosis bacteria are spread through the air and usually affect the lungs. But the bacteria can potentially infect any part of the body, including the kidneys, spine and brain, according to Mayo Clinic.

Infection of the finger "is a rare extrapulmonary [outside the lungs] manifestation of tuberculosis," the authors wrote in the report, which was published online Sept. 19 in The New England Journal of Medicine. Still, this diagnosis is important to consider in people with weakened immune systems, they said.

But how exactly did the patient contract the disease? An investigation pointed to the woman's husband, who had recently traveled to China and developed a cough. He was later diagnosed with active tuberculosis.

The woman was treated with several anti-tuberculosis drugs for nine months, and her symptoms went away completely, the report said.