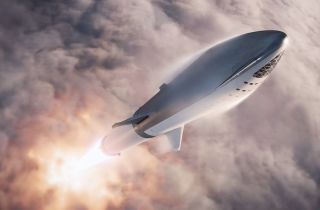 The Big Falcon Rocket would have three fins and a retractable forward wing, according to an illustration of the rocket’s design released by SpaceX's Elon Musk.
(Image: © SpaceX)

"Finally, I can tell you that, 'I choose to go to the moon,'" Maezawa said to cheers in the audience during the press briefing.

Maezawa added, "Ever since I was a kid, I have loved the moon; just staring at the moon filled my imagination; it is always there and has continued to inspire humanity. This is why I cannot pass up this opportunity." And he doesn't want to go alone either. Maezawa said he plans to "go to the moon with artists." He will bring six to eight artists with him, he said.

If the trip goes as planned (and SpaceX has stepped back promises of tourist trips to the moon before), Maezawa will zoom toward the moon in 2023 in the newly designed Big Falcon Rocket.

The trip would put the Japanese billionaire and entrepreneur in rarified company, as only 24 people have ever visited the moon, according to NASA. The last time humans made the journey was in 1972, during the Apollo 17 mission crewed by NASA astronauts Eugene Cernan, Harrison Schmitt and Ronald Evans. [The BFR in Images: SpaceX's Giant Spaceship for Mars & Beyond]

The announcement of this trip, is one of many steps SpaceX has taken to realize the company and the Big Falcon Rocket's mission: "To help advance rocket technology to a point where we could potentially become a multi-planet species and a true spacefaring civilization," Elon Musk said during a press briefing tonight.

SpaceX CEO Musk first announced that the company would be sending tourists to the moon in February 2017, projecting a 2018 launch date. That mission, which would have used the company's Falcon Heavy rocket and Dragon capsule, never happened. The tourists slated to take that trip were never publically named.

Maezawa founded Japan's largest online shopping mall, Zozotown, according to Forbes. He is also an art collector, shelling out $80 million in 2016 for paintings by Jean-Michel Basquiat and Pablo Picasso, Forbes reported. Forbes named the 42-year-old as No. 18 on its Japan's 50 Richest 2018.

The trip will be expensive. SpaceX did not reveal how much Maezawa paid, but just getting to low-Earth orbit costs a pretty penny. In June, MNN reported, private company Axiom Space announced that starting in 2020, it would be offering 10-day trips to the International Space Station, or ISS, for $55 million a pop.)

Currently, there is no good way for the average Joe or Jane to get to space. According to the travel agency SpaceAdventures, seven space tourists have booked tickets aboard the Russian Soyuz spacecraft to the ISS, but the last of those trips occurred in 2009. Russia halted its space-tourism program in 2010, after the U.S. retired its space shuttle program, leaving fewer seats available to get working astronauts into orbit.

Musk and other private spaceflight CEOs have been striving to fill that gap with spacecraft that can get crews to the ISS and beyond. SpaceX's Falcon 9 rocket and Dragon spacecraft already shuttle cargo back and forth between Earth and the ISS; the company hopes to use its rockets to get humans into space, too. SpaceX announced last month that its first crewed Dragon mission aims to take two NASA astronauts to the ISS in April 2019.

The ISS orbits 254 miles (408 km) above Earth. The moon's orbit is, on average, 238,855 miles (384,400 km) away. Maezawa will take about three days to reach the moon before orbiting its far side and slingshotting back toward Earth.

To make the trip happen, SpaceX is designing a huge, three-finned Big Falcon Rocket, sometimes known as the "Big F****** Rocket." New renderings released by SpaceX this month show a seven-engine rocket with a separate booster 30 feet (9 meters) in width. It's meant to hold up to 100 passengers on trips as far away as Mars.

And if you were wondering, "We'll do a bunch of test launches before having any people on board," Musk said.