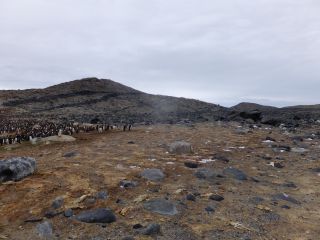 The bodies of hundreds of mummified penguins in Antarctica aren't a sign of an ancient illness that swept through the icy continent, nor are they the remains of a penguin massacre by a ravenous predator.

Rather, these penguins, who were mummified by the cold, dry Antarctica environment, likely died from weather on the opposite end of the spectrum: two extremely rainy and snowy events that happened over the past 1,000 years, a new study finds.

"It is quite likely that global climate warming caused enhanced precipitation, which led to the tragedy," said study lead researcher Liguang Sun, a professor of Earth science at the Institute of Polar Environment at the University of Science and Technology of China. [Charming Chick Photos: Antarctica's Baby Penguins]

The research team stumbled across the remains of the "preserved, dehydrated mummies," many of them chicks, in East Antarctica's Long Peninsula in 2016.

It's actually common to find the remains of dead Adélie penguins (Pygoscelis adeliae), including their feathers and bones, in Antarctica, Sun said. "But it is very rare to find so many mummified penguins, especially mummified chicks," Sun told Live Science in an email.

Radiocarbon dating revealed that these penguins died gradually over the course of decades, and this happened in two different periods, dating to about 750 and 200 years ago. After studying the sediment deposited around the mummies, which included penguin poop and nesting materials, the researchers concluded that "extreme climatic events" that spanned several decades led to the deaths of these penguins.

In addition, the researchers unearthed evidence indicating that floods from the heavy precipitation had carried the penguins' bodies, as well as the surrounding sediment, downhill.

The surviving penguins later abandoned the nesting area, as shown by the small amount of sediment that was laid down after the mass casualties, the researchers said.

Learning how penguins fared during extreme climate events can help researchers predict what might happen to these birds in the future, the researchers, which included scientists from China and Australia, said. And these events don't give much cause for optimism.

"Generally, it is believed that the current global warming trend will continue or even worsen," Sun said. As human-made climate change heats the planet, the Antarctic will see more rain and snow, which will likely "increase the chance of such massive death" among penguin populations, he said.

In addition to the historical accounts, current evidence shows that increased rain and snowfall can be lethal to the penguin chicks. For instance, during the 2013-2014 breeding season, "100 percent of the chicks of about 34,000 breeding penguins died during three events of incessant rainfall and continuous snowfall," the researchers wrote in the study.

Chicks have trouble surviving extreme rain and snow, because the youngsters have yet to grow waterproof plumage, meaning they can die from hypothermia after getting wet and cold. Moreover, massive snowfall can make it hard for breeding adults to find pebbles for their nests, as well as snow-free places to lay their eggs. Snow can be dangerous for incubating chicks that have yet to hatch, because melting snow can drown eggs and cause the chicks to have lower birth weights, the researchers said.

To avoid these mass penguin die-offs, "humankind needs to do more and slow the current global warming trend," Sun said.

The study was published online Aug. 28 in the Journal of Geophysical Research.