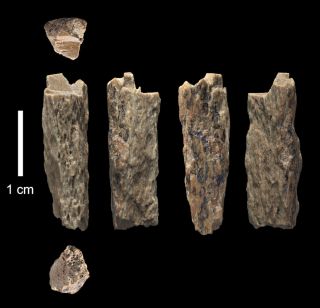 A tiny bone fragment from Denisova Cave in Siberia has provided new evidence that Denisovans and Neanderthals mated.
(Image: © Thomas Higham/University of Oxford)

The closest known extinct relatives of modern humans were the thick-browed Neanderthals and the mysterious Denisovans. Now, a bone fragment from a Siberian cave, perhaps from a teenage girl, has revealed the first known hybrid of these groups, a new study concludes. The finding confirms interbreeding that had been only hinted at in earlier genetic studies.

A number of now-extinct human lineages not only lived alongside modern humans but even interbred with them, leaving traces of their DNA in the modern human genome. These lineages included the stocky Neanderthals, as well as the enigmatic Denisovans, known only from a few teeth and bones unearthed in Denisova Cave in the Altai Mountains. [In Images: The First Bone from a Neanderthal-Denisovan Hybrid]

"A Neanderthal and a Denisovan were genetically more distant from each other than any two people living today are," study co-author Viviane Slon, a paleogeneticist at the Max Planck Institute for Evolutionary Anthropology in Leipzig, Germany, said in an email to Live Science. "So we do not think that they met very often."

The scientists investigated a 1-inch-long (2.5 centimeters) bone fragment, dubbed "Denisova 11," that archaeologists found in 2012 in Denisova Cave. This shard came from a long bone, such as a shinbone or a thighbone, but scientists knew little else about it.

"You can't even tell if it's human or animal by looking at it,"study senior author Svante Pääbo, an evolutionary geneticist at the Max Planck Institute for Evolutionary Anthropology, told Live Science in a phone call.

The researchers analyzed proteins extracted from Denisova 11 and more than 2,000 other bone fragments from Denisova Cave, which revealed the fragment came from a human. The thickness of the outer part of the bone suggested that Denisova 11 belonged to a female who was at least 13 years old when she died, while radiocarbon dating suggested Denisova 11 was more than 50,000 years old.

The scientists next ground to a powder a sample from Denisova 11 and sequenced the DNA from the bone dust.

Previous genetic research suggested that the Neanderthal and Denisovan lineages diverged more than 390,000 years ago, the researchers said. Those genetic studiesalso hinted at interbreeding between Neanderthals and Denisovans, but the extent to which they interbred was unclear, Live Science previously reported.

"I never thought we would be so lucky as to find an actual offspring of the two groups," Slon said in the email.

The researchers also found that the Denisovan father of the individual Denisova 11 had at least one Neanderthal ancestor, possibly as far back as 300 to 600 generations before his lifetime. "So, from this single genome, we are able to detect multiple instances of interactions between Neandertals and Denisovans," study co-author Benjamin Vernot, a population geneticist at the Max Planck Institute for Evolutionary Anthropology, said in the statement.

In addition, the scientists found that the teenage girl's Neanderthal mother was genetically more similar to the Neanderthals of Western Europe than to a different Neanderthal that lived earlier in Denisova Cave. This find suggests that Neanderthals migrated between western and eastern Eurasia for tens of thousands of years.

So far, scientists have sequenced the genomes of only six people from Denisova Cave. That one of these had Neanderthal and Denisovan parents may suggest, from a statistical point of view, that interbreeding may have been common whenever these groups did interact, Pääbo said. "It makes you believe that when these groups met, they may have mixed freely with each other," he said.

The researchers are continuing to look for ancient human DNA, not just in the thousands of other bone fragments in Denisova Cave, but from the sediments that accumulated there as well.

"It's fun to think that there are probably many more discoveries to be made from remains found at the site," Slon said.

The scientists published their findings online today (Aug. 22) in the journal Nature.