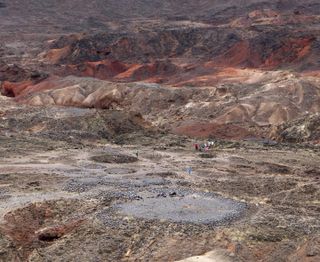 Lothagam North Pillar Site was built by eastern Africa’s earliest herders some 5,000 to 4,300 years ago, and may have taken 900 years to complete. The central burial mound (front) contained an estimated 580 individuals, buried side-by-side without regard for age, gender or class.
(Image: © Katherine Grillo)

About 5,000 years ago, a tribe of roving herders paused by a lake in what is now Kenya to bury their dead. Their undertaking (no pun intended) evolved into one of the most massive and monumental construction projects Africa had ever seen.

After more than 450 years of digging into bedrock, piling up sandstone slabs and ritually burying generation after generation of the deceased, the tribe completed what researchers now consider the earliest and largest monumental cemetery in eastern Africa: a sprawling field of rocky rings, stone columns and burial mounds known as the LothagamNorth Pillar Site.

At only a few feet high apiece, the site's eponymous pillars might not stand as tall or as opulent as other burial monuments of antiquity, like the Great Pyramid of Giza in Egypt or the Mausoleum of Maussollos in what is now Turkey — and that's what makes them remarkable. According to a new study published yesterday (Aug. 20) in the journal Proceedings of the National Academy of Sciences, Lothagam North was a monument built for the people, by the people. Here, the honored dead are not merely emperors and elites, but rather tribe members of every age and gender, buried side by side without discrimination. [Album: The 7 Ancient Wonders of the World]

"The Lothagam North Pillar Site is the earliest known monumental site in eastern Africa, built by the region's first herders," lead study author Elisabeth Hildebrand, an associate professor at Stony Brook University in New York, said in a statement. "This finding makes us reconsider how we define social complexity and the kinds of motives that lead groups of people to create public architecture."

The first herders in east Africa

The Lothagam North Pillar Site is the oldest of six known monument sites built near Lake Turkana, in Kenya, between 4,000 and 5,000 years ago — a time when diminished rainfall led to retreating shorelines that revealed new, fertile plains for herbivores to feed on.

In the midst of this environmental shift, culture changed as well. The first herding tribes had just begun spreading into eastern Africa, the researchers wrote in the study. Here, the tribes were forced to develop new technologies, new strategies for survival and new forms of cultural expression.

The construction of the Lothagam North Pillar Site — essentially a public cemetery — was likely one form that expression took. The centerpiece of the site is a raised stone platform roughly 100 feet (30 meters) in diameter, capped with monolithic basalt and sandstone columns hauled from nearly 1 mile (1.6 kilometers) away. Within this platform is a burial chamber that may have once held up to 580 individuals in tightly packed graves, the researchers wrote.

Lothagam North has been studied as an archaeological wonder since the 1960s, but this new study marks the first time researchers have taken an in-depth look at the social hierarchy (or lack thereof) of the site's dead.

According to the researchers, the deceased at Lothagam North were not buried according to any apparent class or caste system. Elders were buried alongside infants, women were buried alongside men and no individual remains were given special treatment that signified them as greater than their deceased peers. Nearly all of the skeletons found in the burial pit were ornamented with colorful jewelry. Many of the dead wore stone beads or jewelry made of ostrich eggshells. Some wore rings and bangles made of hippo ivory, while others wore headdresses made of animal incisors. One corpse wore a headpiece made of 405 gerbil teeth sourced from more than 100 individual gerbils.

Arrayed around the platform, a cluster of large stone circles and cairns (rough burial mounds made of rocks) gave the whole site a monumental footprint that encompassed more than 15,000 square feet (1,400 square meters) of terrain. Radiocarbon dating of the stones in the central platform revealed that the monument took anywhere from 450 to 900 years to complete.

During those centuries of construction, countless friends and neighbors would have gathered at Lothagam North to witnesshundreds of ritual burial ceremonies, the researchers wrote.

"The monuments may have served as a place for people to congregate, renew social ties, and reinforce community identity," study co-author Anneke Janzen, an archaeologist at the Max Planck Institute for the Science of Human History in Germany, said in the statement. "Information exchange and interaction through shared ritual may have helped mobile herders navigate a rapidly changing physical landscape."

According to the researchers, Kenya's herder monuments could help reshape historical perceptions of social change and the emergence of complex societies. Lothagam North may be proof that the construction of massive, long-lasting public monuments do not require the crack of a whip or crowning of a king to carve out a foothold in history, they said. Perhaps all that is required is a strong communal will … and a few hundred gerbil teeth.