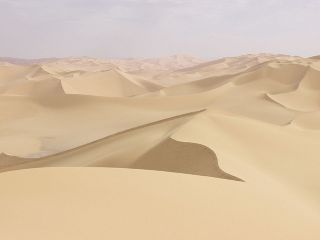 Nowadays, this portion of Libya is part of the great Sahara desert
(Image: © ruba_ch | Flickr.com)

From lakes and grasslands with hippos and giraffes to a vast desert, North Africa's sudden geographical transformation 5,000 years ago was one of the planet's most dramatic climate shifts.

The transformation took place nearly simultaneously across the continent's northern half, a new study finds. The results will appear in an upcoming issue of the journal Earth and Planetary Science Letters.

The findings come from analyses of dust blown west from Africa and dropped into the Atlantic Ocean. Researchers sifted through 30,000 years of dust and ocean bottom muck retrieved with ocean drilling ships. The changing levels of windblown dust in the ocean sediments provide scientists with clues to Africa's climate and how it has changed over time. Simply put, a lot of dust means drier conditions and less dust means a wetter environment.

The wet period, called the African Humid Period, started and ended suddenly, confirming previous studies by other groups, the sediments revealed. However, toward the Humid Period's end about 6,000 years ago, the dust was at about 20 percent of today's level, far less dusty than previous estimates, the study found.

The study may give scientists a better understanding of how changing dust levels relate to climate by providing inputs for climate models, David McGee, an MIT paleoclimatologist and lead study author, said in a statement. Sahara desert dust dominates modern-day ocean sediments off the African coast, and it can travel in the atmosphere all the way to North America.

McGee and his colleagues are now testing whether the dust measurements can resolve a long-standing problem: the inability of climate models to reproduce the magnitude of wet conditions in North Africa 6,000 years ago.