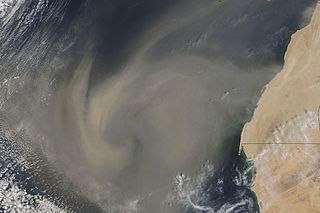 A large, swirling mass of dust, visible on the left portion of this MODIS satellite image, is seen blowing from the Western Sahara into the Atlantic Ocean on Sept. 4, 2005.
(Image: © NASA)

A very concentrated area of Saharan Dust has traveled all the way from Africa and is now heading toward Florida.

The northern Caribbean islands have already been dealing with Saharan dust with very hazy skies.

"This is the largest concentration of dust that I have seen making it that far west across the Atlantic this year," AccuWeather Expert Senior Meteorologist Bernie Rayno said. "Usually dust starts to dissipate as it reaches the western Atlantic."

A webcam image from the south shore of St. John in the Virgin Islands at 9:15 a.m. on Tuesday, July 17, 2012, (to the left) shows hazy, dusty skies. At this time, they were located on the eastern edge of the dust. The image to the right was the same webcam around 3:00 p.m. on Tuesday. The dust had moved on to the west.

Saharan dust is a limiting factor for tropical development in the Atlantic and also causes nasty hazy skies when it is so densely concentrated. However, sunsets are stunning as a result of dust clouds high in the sky with notable, bright red colors on display.

Origin of the Dust The Sahara is the greatest single stretch of desert in the world, besides the Arctic and Antarctic, stretching about 3.5 million square miles across northern Africa.

Rainfall is rare across much of the Sahara, and sparing across the rest of the desert.

"Persistent high pressure with resultant sinking and drying of air is what tends to limit rainfall across the region. There is likely a 'feedback' mechanism at work by which dry, sparsely vegetated earth superheats, thereby further warming the atmosphere and further strengthening the area of high pressure," AccuWeather Expert Senior Meteorologist Jim Andrews explained.

Persistent northeasterly winds, squeezed between an area of high pressure over the northern Sahara and low pressure over the equator, are often strong enough to stir loose sand and dust in the Sahara. Although the coarser sand is not normally raised far above the land, the smaller dust particles can be lofted 2 or 3 miles high into the sky, Andrews said.

Especially strong winds can blow over thousands of square miles of the desert can scour enormous volumes of dust from the surface. According to a University of Wisconsin-Madison study by Amato Evan, the amount of dust is said to be in the millions of tons.

A large, swirling mass of dust, visible on the left portion of this MODIS satellite image, is seen blowing from the Western Sahara into the Atlantic Ocean on Sept. 4, 2005. Image from NASA.

During a dust storm in the Sahara, which can last for days, the visibility can drop to zero. These long dust storms yield clouds of dust that span one thousand miles or more. Large dust clouds can traverse westward across the Atlantic as they get steered by trade winds.

Impacts of the Dust The clouds of dust are associated with large zones of dry air, which is an inhibiting factor for tropical storms and hurricanes.

The large zone of dust and dry air has been one of the factors in the recent quiet state of the tropics in the Atlantic.

Beautiful sunsets are observed since the Saharan dust clouds resides so high in the atmosphere. The dust particles act to scatter certain wavelengths of light, allowing red hues to be illuminated.

Yet another large cloud of dust has recently moved off the western coast of Africa and appears like it will continue to move westward across the Atlantic.