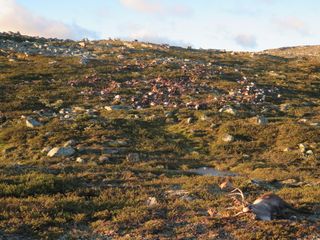 This photo, taken in 2016, shows the field of reindeer carcasses shortly after they were struck by lightning.
(Image: © Havard Kjotvedt/Norwegian Environment Agency)

Two years ago, a lightning storm was responsible for a major reindeer massacre in Norway.

Exactly 323 reindeer, including 70 calves, were felled by the strikes, which caused widespread damage because the electricity was able to course through the wet ground. Shortly after the mass die-off, officials took the reindeers' heads, to test for chronic wasting disease — a nervous-system disease found in deer and elk — but the rest of the bodies were left in the field for nature to take its course.

Now, the headless carcasses are teaching scientists how new life sprouts from a land of death. That's because an area with so much decomposing matter could be fertile grounds for new plant life to grow, a group of Norwegian scientists reported Aug. 15 in the journal Biology Letters.

To document how the reindeer bodies affected the ecosystem, the researchers surveyed the carcass-strewn area for traces of poop from scavenging animals. Their research was part of a self-funded project called "REINCAR," short for both "reindeer carcass" and "reincarnation." And if this sounds like a particularly smelly endeavor to you, it is: The team had to smear menthol cream in their noses to deal with the stench, according to The New York Times.

But rotting stench aside, the researchers found a landscape that's getting ready to sprout new life. Fox and bird feces were scattered around the carcasses, and in the feces of the crows, there were crowberry seeds. [6 Surprising Facts About Reindeer]

Crowberry plants (Empetrum nigrum) are a "keystone species of the alpine tundra," meaning that they play a large role in shaping the ecosystem, and without them, the ecosystem would be very different, the authors wrote in the study. And the carcasses are creating a bare, nutrient-rich soil for such plants to grow in, according to the Times.

As various scavengers drop a mix of crowberry and other seeds around the carcasses, you get "directed seed dispersal to the ideal germination spot," lead author Sam Steyaert, a researcher at the University of South-Eastern Norway and the Norwegian University of Life Sciences, told the Times. In other words, the scavengers are delivering the seeds to perfect places for them to grow.

In 21 out of the 24 fecal samples they took from crows, the researchers found viable crowberry seeds, or seeds that could potentially grow into seedlings. And when the team visited the site last week, they saw many crowberry seedlings spurting up around the field, which also now contains grass and sedges, according to the Times.

"Our study provides novel insight into how scavengers may have landscape-level effects on plant distribution," the authors wrote in the study. "Our study took advantage of a rare event."

But not all animals loved this area. The team found that rodent poop was less concentrated around the carcasses compared with in other areas. This could be due to fear or just the dearth of plant life to eat around there, they wrote in the paper.