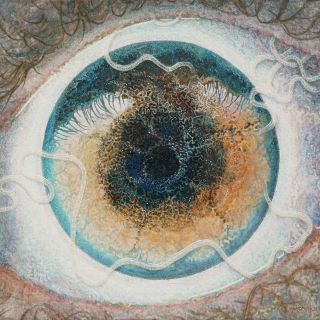 A painting called "The Host," by contemporary artist Ben Taylor, is based on Taylor's experience with a parasitic worm that he found in his eye.
(Image: © Ben Taylor )

The eerie painting depicts an image few of us would want to see in the mirror, let alone casting a shadow across our own field of vision: a pale, segmented worm slithering across an unblinking eyeball.

Called "The Host," by contemporary artist Ben Taylor, the striking painting is based on Taylor's personal experience with a parasitic worm called Loa loa, which he discovered crawling through his eye one day in 2015. Adding to this strange tale, Taylor says he thinks the parasite influenced his artwork, even before he was aware of his infection.

"Now that I look back, I realize how strange and interesting it was to have my artwork subconsciously guided" by worms, Taylor wrote on his website. "It has made me wonder who the artist is, really?" ['Eye' Can't Look: 9 Eyeball Injuries That Will Make You Squirm]

For about two years before his diagnosis, Taylor, who lives in England, experienced a slew of mysterious symptoms, including high white blood cell counts, lumps that would appear and disappear, itchy skin patches, joint aches, severe eye pain and sensitivity to light. Taylor said he felt "a sense that amongst the millions of microscopic beings that form 'me,' that there was something gatecrashing the party." But tests for parasites came back negative.

During this period of deteriorating health, Taylor began work on an abstract painting that consisted of intricate, worm-like patterns inside a round circle. But at the time he painted it in 2014, Taylor was not satisfied with the result. "I had no idea what compelled me to paint it, or what it was trying to say," Taylor wrote, and he shelved the work in his studio.

Months later, Taylor felt a persistent pain in his eye, and when he looked in the mirror, he saw something wriggling under the surface of his eyeball.

He went to the hospital, where an eye surgeon removed a worm 1.4 inches (3.5 centimeters) long from his eye.

Taylor was diagnosed with loiasis, an infection caused by the Loa loa worm, also known as the African eye worm. People get Loa loa if they are bitten by infected deerflies that are found in certain parts of West and Central Africa, according to the Centers for Disease Control and Prevention (CDC).

Taylor, who says he has spent "a lifetime living and travelling in far-flung lands," visited Gabon in Central Africa in 2013, when he likely became infected with the worm.

After his loiasis diagnosis, Taylor underwent a week of intensive treatment, and doctors also diagnosed him with two additional parasites: hookworm and Strongyloides, a type of roundworm.

Shortly after his treatment, Taylor came across the painting he had started in 2014 and realized what it looked like. "I was immediately aware that what I had painted looked like an eye made out of intricate worm-like patterns," Taylor said. He began a "second phase" of his painting, adding eyelashes, the sclera (the white part of the eye) and the slithering white worms.

Taylor told The Washington Post that worm-like patterns were not typically his style, but oddly, he started experimenting with them as his then-mysterious symptoms progressed. "I definitely believe that the worms had a hand in that painting," he said.

Taylor's painting is featured on the cover of the August issue of the journal Emerging Infectious Diseases, which is published by the CDC. The managing editor of the journal, Byron Breedlove, came across the painting while looking for an image that would fit the issue's theme for this month: Parasitic and Tropical Diseases.

"You're sort of startled by this almost 3-D thread that runs around the eye. It's very arresting to look at," Breedlove told The Washington Post. "I realized this would make a very striking image for a cover art … You can't help but look at it … It's looking back at you."