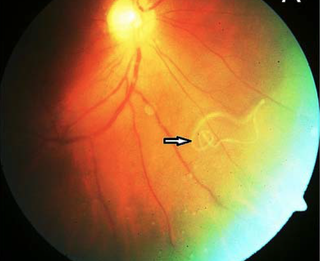 A man in India can see clearly once again now that surgeons have removed a "fairly long live worm" that had crawled deep inside his left eye, a new case report says.

The slender worm, which was later identified as a parasitic species known as Loa loa, can be transmitted to people by the bites of mangrove flies, which carry the larvae of the worms. This leads to an infection called loiasis.

The 25-year-old man's job may have made him more vulnerable to getting bitten by an infected fly, doctors said.

"His occupation as a fruit vendor may have increased his risk for infection, as fruit flies may carry the parasite," said Dr. Bhagabat Nayak, an ophthalmologist and eye surgeon at the Dr. R.P. Centre for Ophthalmic Sciences in New Delhi, India. Nayak co-authored the case report, which was published online Jan. 8 in the journal BMJ Case Reports.

When he went to the eye doctor, the man's eye was painful and red. He was seeing "floaters," which are small specks, threads or clouds that move in a person's field of vision, and he had reduced vision in his left eye over a two-week period.

The man said he felt like there was a shadow in his left eye and that something was moving inside it, blurring his vision, Nayak said. [7 Absolutely Horrible Head Infections]

An eye exam confirmed that something visible was indeed wriggling around in the man's eye, and it was clearly a live worm.

The case report described the critter as "a fairly long live worm moving around in a haphazard and relentless manner throughout the vitreous cavity," which is located toward the back of the eye, behind the lens and in front of retina.

This is the first reported case of loiasis in that part of the eye, the authors said.

The worm might have migrated to the vitreous cavity while still in its larval stage, either moving through blood vessels located in the eye or burrowing through the tissue layers of the eyeball, Nayak said. It may then have grown once it got into the cavity, Nayak told Live Science.

When the L. loa worm is found in the eye, it's referred to as an "eye worm." But the parasite can also get into other areas of the body and affect the subcutaneous tissue, or the area under the skin in the limbs, Nayak said.

The young man's doctors decided to surgically remove the "eye worm" rather than use drugs that could have killed the worm inside the eye. The doctors were concerned the drugs may cause toxic damage to tissues in the retina and macula, the area of the retina responsible for central vision,  and that could lead to blindness, Nayak said.

After the worm was removed from the man's left eye, microbiologists identified the creature as an adult maleL. loa worm.

Two weeks after surgery, the fruit vendor reported that his vision had improved signficantly and his floaters had disappeared.