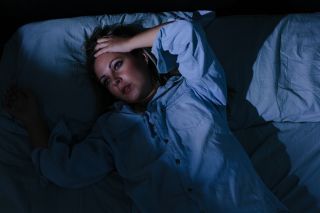 Getting too little sleep is tied to a slew of ill health effects, and now, researchers say sleep deprivation could contribute to loneliness as well. And this loneliness could be "contagious."

A small new study suggests that when people are sleep-deprived, they feel lonelier and are more inclined to keep a greater physical distance from others, compared with when they are fully rested.

What's more, sleep-deprived people may give off a lonely vibe; they are judged by others to be lonelier and less socially "attractive," compared with fully rested people, the researchers said. This could lead to a "vicious cycle" that perpetuates loneliness, the investigators said. [5 Surprising Sleep Discoveries]

Surprisingly, the lonely feeling tied to sleep deprivation may also be socially "contagious." The study found that when well-rested people had a brief encounter with a sleep-deprived person, the well-rested people reported feeling lonelier themselves. This suggests there may be a "viral contagion of social isolation" linked to sleep loss, the researchers wrote in the study, published today (Aug. 14) in the journal Nature Communications.

The researchers said the findings raise the question of whether concurrent increases in sleep deprivation and loneliness in populations in developed countries are related.

"It's perhaps no coincidence that the past few decades have seen a marked increase in loneliness and an equally dramatic decrease in sleep duration," lead study author Eti Ben Simon, a postdoctoral fellow at the Center for Human Sleep Science at the University of California, Berkeley, said in a statement. "Without sufficient sleep, we become a social turnoff, and loneliness soon kicks in."

The study involved a series of experiments conducted both in a laboratory and online, using surveys.

For the lab studies, the researchers tested 18 healthy young adults after they'd had a normal night's sleep and again after they were deprived of sleep for an entire night.

In the brain scan, the researchers found that when people were sleep-deprived, they had increased brain activity in an area called the "near-space network." This area is thought to be active when people perceive potential incoming threats from others.

In contrast, in an area of the brain called the "theory of mind" network, which is thought to encourage social interaction, activity was decreased when participants were sleep-deprived.

To see if these findings might translate to the real world, the researchers had about 140 people track their sleep for two nights using sleep logs to note about how long it took them to fall asleep and how long they stayed asleep.

People who reported poor sleep from one night to the next also reported an increase in feelings of loneliness the next day, while those who got better sleep reported reduced loneliness, the researchers found.

Finally, the researchers wanted to see how other people viewed those who didn't get enough sleep. The scientists had about 1,000 people watch videos of the lab participants being interviewed when they were sleep-deprived or well-rested.

The viewers rated participants as appearing lonelier, and less like a person they would want to interact or collaborate with, if they were sleep-deprived compared with if they were well-rested.

And the researchers were also surprised to find that the viewers reported feeling lonelier themselves after watching an interview with a sleep-deprived person.

Overall, "this all bodes well if you sleep the necessary 7 to 9 hours a night, but not so well if you continue to short-change your sleep," said senior study author Matthew Walker, a UC Berkeley professor of psychology and neuroscience. "On a positive note, just one night of good sleep makes you feel more outgoing and socially confident and, furthermore, will attract others to you," Walker said.

The researchers noted that changes in people's mood and feelings of anxiety that increased when people were sleep-deprived could have affected the results. However, using statistical methods, the researchers found that their results held even after taking into account these changes. The findings suggest that sleep loss contributes to feelings of loneliness, independent of these other emotions, the scientists said.

However, participants in the study were all young adults ages 18 to 24, and future studies should examine how the link between sleep loss and loneliness changes over the human life span, the researchers said.